10 Bizarre food combinations that will blow your mind! 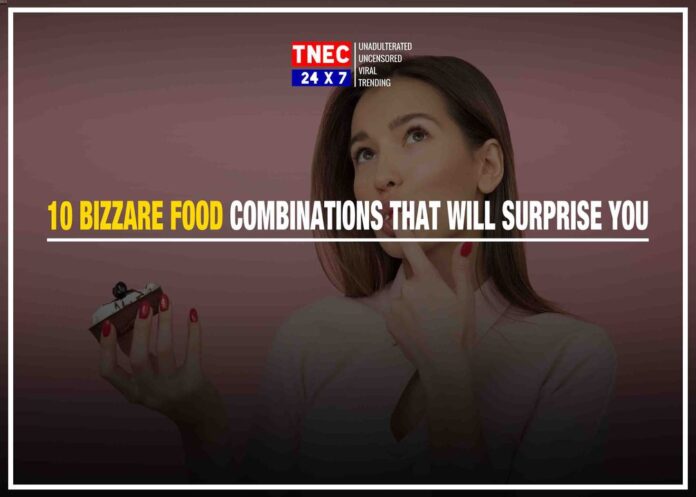 When it comes to food, we all love to do experiments with it, often in a hope to create something new or just to try out something fun. Sometimes the experiments are not by our choice but we do it unintentionally to deal with those untimely hunger pangs. However, we have all experienced some extremely weird food combinations in our lives. A few dishes turned out to be extremely delicious while others were so strange sounding combinations that we never think of even trying.
With that in mind, here are 10 really strange food combinations that might just do it for your taste buds.

Jalebi– a crispy, crunchy and sugary dessert which is loaded with flavours is a popular sweet for Indians. Can you imagine giving it a Chinese twist by adding soya sauce to Jalebis? Strange right? The hyper-popular snack/sweet jalebi, is stir fried in bell pepper and soya sauce to give it a Chinese flavour. The most loved Indian sweet got ruined in the worst way possible.

Oh, so you thought that the only thing that goes with French fries is ketchup? You will be surprised to know that these salty fries is combined with exquisite sugary icecream and is tried and liked by many people across the globe. Notably, instead of dipping the french fries in ketchup, or any other spicy dip, these salty fries are now relished with ice cream.

A Gujarati dish, Dhokla is is made with ground, fermented batter of rice and lentils like chana dal or urad dal. However, a wild combination of Dhokla With Chocolate Sauce is devoured by many, where the classic Dhokla is dipped in hot chocolate sauce to give the classic savoury dhokla an extra sweet twist. Some say that it tastes like spongy chocolate cake with a tang.

Paan is betel leaves with areca nut widely consumed throughout Asia. We all are aware of the fact that, overconsumption of can be harmful for our teeth as well as our health. Well, how about drinking it instead? You can get these digestive drinks made from betel leaves and milk at Punjab Grill by Jiggs Kalra. Another variety of paan combo has vodka in it.

White rice is a staple food for Indians and is often consumed with Dal, sabji, curries etc. What if you’ve got no mood for cooking a side dish? Well, a quick and easy idea would be to have white rice with Ketchup. This dish is definitely for the ones who swears by ketchup, but for the rest of us ‘normal’ folks it sounds gross. The ketchup here is considered as pickle and mixed with plain white rice.

Panipuri or puchka or golgappa is one of the most common street foods in Indian subcontinent. On the other hand, Maggie lovers are committed to endure the curry-flavored magic maggie noodles. However can you imagine merging Maggie amd Pani puri into one dish? Few months back, a photo of Maggi pani puri has gone crazy viral on social media which left the netizens feeling disgusted. A sukha( dried) Pani Puri is stuffed with ‘overly cooked’ Masala Maggi noodles and served to the foodies.

We all have heard or tried weird pizza toppings but have you heard of Honey Pizza? Well, this sweet and spicy combination that certainly depends on your palate preference has turned out to be the new fad!

Waffles are often topped with whipped cream and chocolate syrup, honey, ice cream,Blueberries, Yogurt but can you think of adding Pasta sauce to waffles? A very strange combination that is liked by many is the dish of Waffles and Pasta Sauce. Incase you had no idea that your favorite waffles are not only covered with chocolate sauce, but also with the pasta sauce.

One of the most weird and popular combination of eating Cheetos with milk, which is followed by many. Although this sounds like really bizzare food combination but the neutral flavor of the milk doesn’t overpower the cheesy and savory flavor of the Cheetos which ultimately makes this combination actually taste good.