3 Conspiracy theories that will blow your mind for sure! 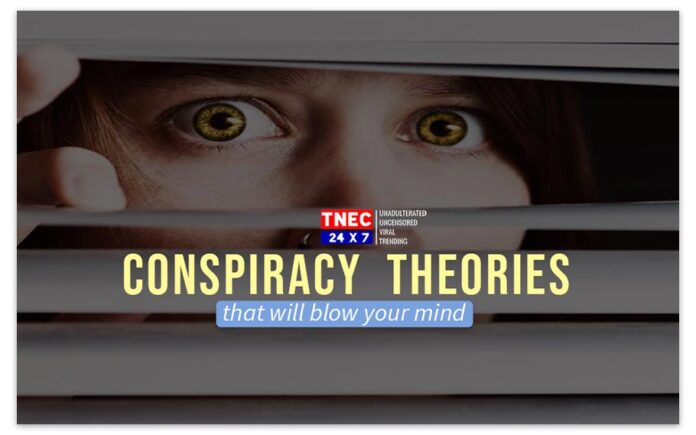 Conspiracy Theory is a belief that some covert but influential organization is responsible for an unexplained event.

This is how Google defines ‘conspiracy theory’ and believe it or not, everyone has one. Be it regarding the latest COVID Vaccine or COVID itself. And there’s a reason for it.

We all love conspiracies and somehow like to assume that we know of something extraordinary. Here are the five most mind-boggling Conspiracy Theories that will force you to introspect on everything that you knew.

False memories can sometimes be shared by multiple people. In 2010, a shared false memory phenomenon was dubbed “the Mandela effect” by self-described “paranormal consultant” Fiona Broome, in reference to her false memory of the death of South African anti-Apartheid leader Nelson Mandela in prison in the 1980s (he actually died in 2013, after having served as President of South Africa from 1994 to 1999), which she claimed was shared by “perhaps thousands” of other people.

Also read: Did You Know? In 1942, there was a man called ‘Phantom Barber’ who would break into people’s house for a strange reason!

Scientists suggest that these are examples of false memories shaped by similar cognitive factors affecting multiple people and families, such as social and cognitive reinforcement of incorrect memories or false news reports and misleading photographs that influence the formation of memories based on them.

Do you have or had such memories of the past which later proved to be false? Give it a thought and you’ll probably be able to connect some dots.

Not many haven’t come across the concept of the Illuminati. For the ones who didn’t, here’s a brief intro.

The Illuminati is a name given to several groups, both real and fictitious. Historically, the name usually refers to the Bavarian Illuminati, an Enlightenment-era secret society founded on 1 May 1776 in Bavaria, today part of Germany. The society’s goals were to oppose superstition, obscurantism, religious influence over public life, and abuses of state power. “The order of the day,” they wrote in their general statutes, “is to put an end to the machinations of the purveyors of injustice, to control them without dominating them.”

Also read: Marvel confirms to kill off Major Avenger, Doctor Strange character in its new release ‘The Death of Doctor Strange’ this September

It is claimed by some that members of the Illuminati of high degrees have certain extraordinary abilities such as reading auras or using numerology to predict the future.

Do you think there’s some secret society that controls the world?

This keeps making regular rounds on the internet and you have come across it at least for once. Especially, after the viral Facebook event “Storm Area 51, They Can’t Stop All of Us” that took take place on 20 September – even though the person who came up with the idea says it was a joke.

Area 51 refers to a map location and is the popular name for a United States Air Force base. It is at Groom Lake, a dry lake bed in the Nevada Desert, 85 miles (135km) north of Las Vegas. What goes on inside is extremely secret. Members of the public are kept away by warning signs, electronic surveillance and armed guards. The secrecy surrounding Area 51 has helped fuel many conspiracy theories.

Most famous is the claim that the site hosts an alien spacecraft and the bodies of its pilots, after they crashed at Roswell, New Mexico, in 1947. The US government says there were no aliens and the crashed craft was a weather balloon. Others claim to have seen UFOs above or near the site, while some say they have been abducted by aliens, and even experimented on, before being returned to Earth.

And, in 1989, a man named Robert Lazar claimed he had worked on alien technology inside Area 51. He claimed to have seen medical photographs of aliens and that the government used the facility to examine UFOs. Reading all this definitely arises questions as conspiracy theorists continue looking for more information on Area 51.

These are just glimpses of countless conspiracy theories surrounding our everyday life. However, we must act sensibly, be aware and not believe everything we read on the internet.

Also Read: Want to travel but have little savings left? Here are 5 countries that are not going to burn your pockets!