Abortion: A Human Right for all Women! 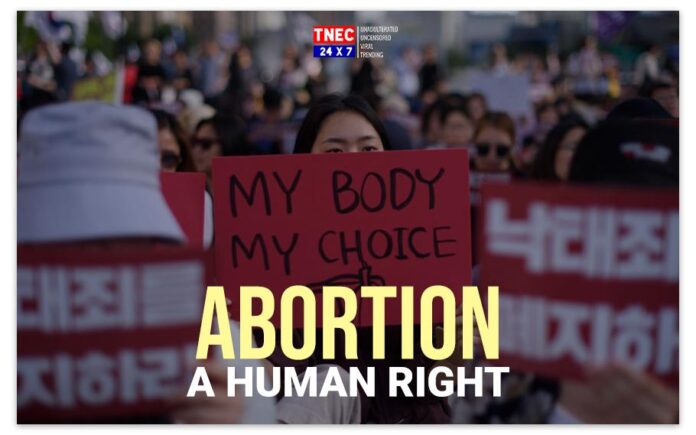 By: Puja Mahanta, The North-Eastern Chronicle

“It is poverty to decide that a child must die so that you may live as you wish.”

Women will not be able to achieve full human dignity and personhood unless they assert and demand control over their bodies and reproductive processes. For the women concerned, the right to undergo an abortion is a question of personal conscience and deliberate choice.

Abortion is the medical or surgical termination of a pregnancy, and it is one of the most ancient, prevalent, and divisive medical operations. The influence of abortion on a woman’s mental health has been the subject of heated discussion. Abortion does not raise a woman’s risk of depression, anxiety, or post-traumatic stress disorder, according to research.

Is abortion a Human Right?

At the same time, only a tiny number of nations outright outlaw abortion. Abortion is legal in most nations and jurisdictions if it is necessary to preserve the life of the pregnant woman or if the pregnancy is the consequence of rape or incest.

Abortion is a sensitive topic that elicits strong feelings and strong opinions. Equal access to safe abortion services, on the other hand, is first and foremost a human right.

No one is forced to undergo an abortion when it is safe and legal. Women are compelled to carry undesired pregnancies to term in countries where abortion is illegal and dangerous, or face significant health repercussions, including death. Unsafe abortion is responsible for around 13% of maternal fatalities globally, or between 68,000 and 78,000 deaths each year.

For decades, women’s groups throughout the world have battled for the right to safe and legal abortion, and international human rights legislation is increasingly supporting their claims. In truth, international human rights legal documents and authoritative interpretations of those treaties force the conclusion that women have the right to make their own reproductive decisions, including abortion.

Fight for Legal and Safe Abortion

The right of a woman to end a pregnancy has been the subject of debates and judicial decisions. Through various judgments, the judiciary has played a significant role in infringing on the right of women/wives to abort pregnancy. The right to personal liberty is the most valuable, sacred, inalienable, and fundamental of all citizen rights.

One of the most important battles was entrenched in Article 21 of the Indian Constitution in the form of life and personal liberty, which are protected under Chapter 3 of the Indian Constitution. The right to abortion is a type of private right that is declared to be a continuation of the right to life under Article 21. It may also be defined as a woman’s total control of her reproductive organs.

Understanding Right of Abortion in India

Abortion regulations in India are governed by sections 312 to 316 of the Indian Penal Code and the MTP Act of 1971. By examining the MTP ACT 1971, we can see that it does not grant a woman the right to terminate her pregnancy through abortion. The medical professionals are in charge of making the final choice.

Pregnancy can be terminated if the medical practitioner agrees in good faith. In this case, the IPC and MTP ACT impinge on a woman’s right to privacy, health, and dignity, as provided by Art.21. If abortion on demand (for rape or other reasons) is not permitted under safe circumstances and is limited, women will seek unsafe abortions, which will result in women’s mortality and death, infringing on their right to health and the right to live with dignity.

In India, the unborn has also been defined as a legal person by fiction in several statutes20. Only after being born alive can an unborn child gain rights. As a result, the state is only allowed to intervene in abortion cases once the viability stage has passed.

Nobody else has the right to your body but you. Any act that is performed on your body without your permission is a violation of your basic human rights.

In India, where the right to reproduce is managed by the husband and in-laws rather than the lady, this is a major issue. Because you will be the one to go through labour, the decision to have a child is completely yours. No one can make that decision for you.

Also Read: What happens to your body when you never have sex? Read to find the shocking impacts!

International Disability Day: Being indifferent towards the Differently-Abled