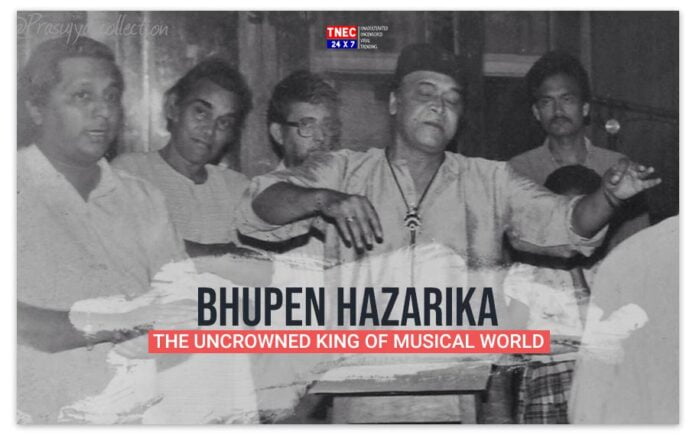 By: Bhagyashree Sarma, The North-Eastern Chronicle

One can always find the history of an individual’s prominence in a particular state which leaves a great impact on the area. Such one remarkable singer to gain utmost fame in Assam and in the nation as well was evergreen musician, Bhupen Hazarika. From being a poet to composing songs, Bhupen Hazarika radiates the themes of humanity and universal brotherhood. He is widely known to have introduced the culture and folk music of Assam and Northeast India in Hindi cinema at a national level. The iconic singer earned the title of Xudha kontho, literally meaning “nectar-throated”, as Assam’s rich folk heritage is interpreted through his songs.

The legend hailing from Assam, was born on 8 September 1926 to Nilakanta and Shantipriya Hazarika. He was the eldest among his 10 siblings.

Hazarika is an Indian playback singer, poet, lyricist, musician and filmmaker. Many of his Assamese songs have been translated and sung in many languages.

Culture is deeply rooted in Hazarika’s family. Bhupen Hazarika inherited his singing skills from his mother, as she introduced him to the state’s folk music by singing lullabies to him. At the age of 10 years, he sang a Borgeet, that is, Assamese devotional songs that was first composed by Srimanta Sankardeva, which greatly impressed Jyotiprasad Agarwala, the noted Assamese lyricist, playwright and Assamese filmmaker.

Bhupen Hazarika studied at Sonaram High School at Guwahati, Dhubri Government High School, and matriculated from Tezpur High School in 1940. He joined the Banaras Hindu University to pursue his BA degree in 1944 and MA degree in political science in 1946. Three years after completing his MA he briefly worked at the All India Radio station at Guwahati, before embarking for his doctoral studies at Columbia University. Bhupen Hazarika earned his doctoral degree in 1952 from Columbia University, New York.

One of the great compositions of Bhupen Hazarika is ‘Bistirno Parore’, a song based on the imagery and concept of Robeson’s Ol’ Man River. Hazarika was involved in the All Assam Conference of Indian People’s Theatre Association. Soon after completing his education, he became a teacher at the Guwahati University. Eventually he left his job and shifted to Kolkata.

Bhupen Hazarika being a film director, made award-winning Assamese films Pratidhwani in 1964 and Shakuntala Sur in 1961. He directed Loti- Ghati (1966), Chik Mik Bijuli (1969), For Whom the Sun Shines (1974) and Mera Dharam Meri Maa (1976). He composed music for many Assamese and Bangla films such as Aarop (1973), Chameli Memsaab (1975) and Shimana Perye (1977). Some of the notable works of Bhupen Hazarika are Rudaali, Darmiyaan: In Between, Gaja Gamini, Daman, Indramalati.

His famous songs include (in Assamese):

Here is a list of the awards and recognitions that Bhupen Hazarika have earned:-

• Award for the Best Feature Film in Assamese (Shakuntala; Directed by Bhupen Hazarika) in the 9th National Film Awards (1961)

This eminent singer died of multi-organ failure in Mumbai on November 5, 2011 and was cremated near the Brahmaputra river in a plot of land donated by the Gauhati University.

Sachin Tendulkar reaches UAE ahead of second phase of IPL of 2022: Will coach Mumbai Indians and son Arjun