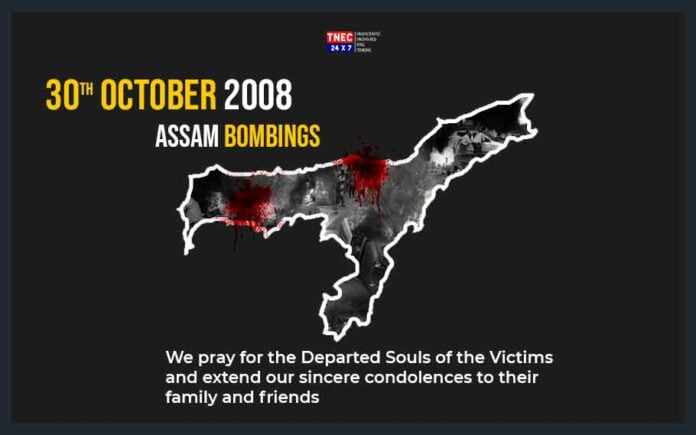 Black Day: On October 30, 2008, Assam witnessed a black day in its history when a series of bombs occurred, killing hundreds of individuals.

Three explosions occurred in Kokrajhar, one was in Bongaigaon and two on Barpeta Road, with additional probable grenade explosion.

The NDFB’s Ranjan Daimary plotted a series of bomb bombings in Ganeshguri, Panbazaar, Kachari, Barpeta, Kokrajhar, and Bongaigaon, which resulted in bloodshed in these places.

Black Day; 72 lives taken in Guwahati alone due to blast

The explosive at Ganeshguri was concealed in a car and detonated roughly 100 metres from the government residence of then-Assam Chief Minister Tarun Gogoi.

Shortly after the attack, the state authorities announced a high alert and dispatched paramilitary forces to retain control of a possibly explosive situation.

That day when, whenever remembered, still shook the people’s beliefs because 72 lives were taken in Guwahati alone.

Thirteen years have gone, but the horrendous incident that occurred cannot be forgotten. Our hearts go out to the bereaved and everyone touched by the terror attack on October 30, 2008.

Markets in Guwahati as well as other sections of western Assam were struck by serial bombs before lunchtime in 2008, resulting in approximately 81 deaths and 470 injuries.

Tribute paid to victims of blast

Due to jammed phone networks created by the bombs, members belonging to the Assamese diaspora were powerless to contact family after the blasts, making it nearly impossible to get information out of the area.

Every year, the families of the deceased requested the government to punish the perpetrators, but the victims have yet to receive the retribution promised by both the past and current governments.

Every year on this day, people offer homage to those who died beneath the Ganeshguri flyover as well as at the CJM court in Panbazaar.

Ranjan Daimary, the mastermind behind the explosives and the leader of the National Democratic Front of Bodoland (NDFB – R), was sentenced to life imprisonment by a CBI court last year.

He was released on bond previously this year for signing the Bodo Accord, a tripartite agreement signed in January.

On this black day of Assam’s history, we remember and pray for the victims’ departed souls and send our heartfelt condolences to their loved ones.

Bhaskar Jyoti Mahanta, the DGP of Assam, sent out a tweet, “30th October 2008… a black day in the history of Assam. On that day in Guwahati, scores of people died. Assam’s recent history has been full of such gory incidents — of blasts and bullets. Many children were orphaned.”

“ASHWAS a project by Assam Police has been with the children of people killed in such violent incidents. Today, I met a few of those beneficiaries under ASHWAS along with the representative from ‘National Foundation for Communal Harmony’ (Min. Home Affairs),” he further expressed.