China’s Weather Modification Experiment: Stealing rain from India, a cause for concern 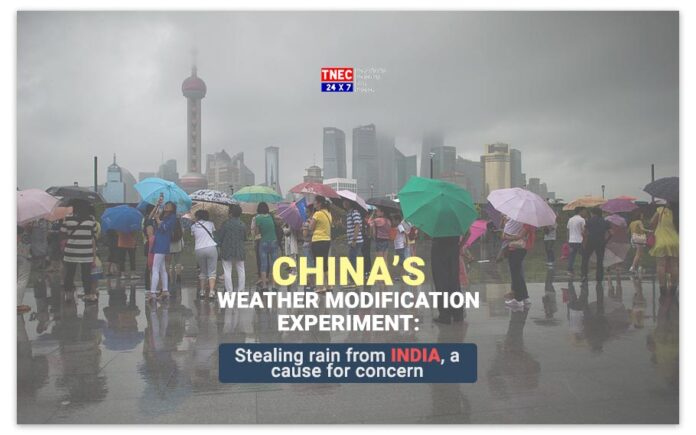 It was August 8, 2008, the Olympics opening ceremony and the Chinese Weather Modification office was busy firing a total of 1,104 rain dispersal rockets to control the rain. The rockets stopped the rain clouds reaching the Olympics arena. The process was going on for eight hours straight and 21 different sites launched rockets.

The weather modification office managed to come with such an ‘attack’ which made the rain bearing clouds precipitate at the locations where they were being hovered at the time the rockets were attacking them. Excessive amount of rain was witnessed in those areas.

The rainy season in Beijing is the month of August and the weather office had predicted rain for the Olympics opening ceremony night. The humidity around the stadium was around 90 per cent according to the reports that said a heavy rain will come. So, it was a successful attempt by the weather controllers of China.

How the success at the Olympic opening ceremony made china dedicated towards weather manipulation?

After the successful attempt by the meteorologists of China during the Olympics and the 60th National Day Parade highlights the importance the Chinese meteorologists are giving to artificial weather manipulation.

More than 37,000 people are currently working under weather modification activities nationwide, said the Chinese sources. China has all the weapons located in more than 30 provinces and municipalities for weather manipulation. Aircrafts have also been modified in order to practice various weather modification experiments.

Approximately 7,000 anti-aircraft guns and 5,000 special rocket launchers are available with the Chinese meteorologists. China also invests US $63 million every year to own the world’s biggest artificial weather modification programme.

What is cloud seeding?

Do you also wish to stop rain when you are attending a wedding or playing with your friends? If you do , I must say there is a country which has the largest cloud seeding system. Yes, that is in the people’s republic of China. Now what is cloud seeding?

It is more like something out of a cartoon. But China has actually been the country with one of the world’s most advanced weather-modification systems for decades.

Their goals are modest: more rain in dry areas, decrease the destruction of fields by hail and sunny days for peaceful national events. But that modesty is slowly fading away.

Earlier, China also made an announcement to increase its rainmaking abilities in order to cover approximately 60% of the country before 2025. Information is catchy, but the continuous uses of these capabilities are increasing the fear and the effects that are on its way because of the current condition of changing climate. These concerns need to be addressed as soon as possible for the wellbeing of China and the entire world.

Why India should be concerned about China’s cloud seeding experiments?

The recent project of China aiming to bring artificial rain to an area three times that of Spain which has been discussed over the Tibetan Plateau is a major reason for concern in India.

Tibet has Asia’s most important rivers which are the Ganges, Indus,Irrawaddy, Brahmaputra, Mekong and Salween. They are Flowing through Laos, Myanmar, China, Pakistan,Nepal, India and Bangladesh constituting the lifeline of nearly 3.4 billion people which is 46 percent of the world’s population.

Since it is discussed that the plateau might be considered a shared ecological frontier, there is a probability of a huge change over the fragile ecosystem of not just the lower riparian India, but other neighbouring Asian countries as well.

According to sources, China’s experiment on ‘cloud seeding’ using aircrafts to spray chemicals like potassium chloride, sodium chloride and silver iodide into the clouds to make it hold the rain in, is a part of its climate change which the weather controllers of china already projected saying the Tibetan plateau has a lot of chances to suffer severe droughts due to the estimated rise in temperature and decrease in seasonal rainfall.

The need for such techniques to use artificial rain-making systems is questionable for the inhabitants of that area since the Tibetan plateau is hydrologically much self-sufficient.

How will India give safety assurance to the people living in the northeastern region?

India should therefore strengthen its capabilities to monitor in the Northeast region of the country by providing borders through geospatial technology.

To save the lives of 3.5 million people living in the fragile ecosystem of Brahmaputra from China’s cloud seeding ambition in Tibet, India should work on developing its own hydrological models for flood prediction and Examine the flow of the rivers on a regular basis which includes both non-monsoonal flow data and flood season data from its own hydro-meteorological stations which will increase India’s capacity to detect any dreadful condition upstream that could possibly lead to a natural disaster in the entire country.