Climate change making the most loyal Albatross species to split up 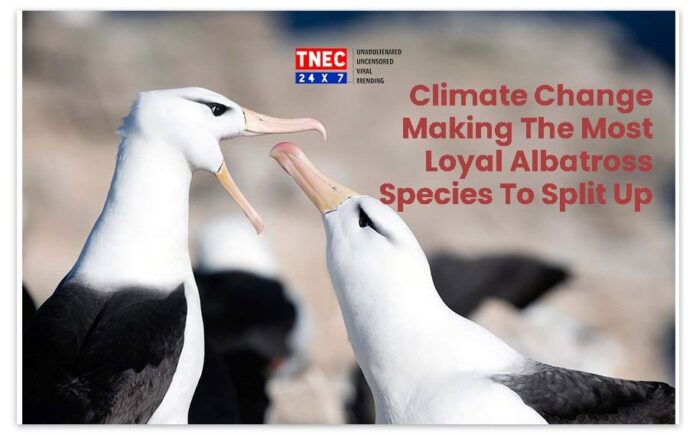 The impact of climate change has dawned widely upon these creatures. These seabirds are facing a huge risk of survival from human activities that result in choking on waste.

A co-author of the study Dr Christopher Barbraud said, “Albatrosses and other seabirds are long-lived predators that fly very long distances to forage at sea and nest on land. As a key indicator of the ecosystem’s health, studying how seabirds fare in the face of climate change can help us predict the ecological impacts on the entire marine food web.”

As many as 200 breeding pairs of black-browed albatross at Kerguelen Island were monitored by the ecologists right from the year 1979 in France.

It was after close monitoring, it was revealed that the drastic change in climate that is the surface temperature of the sea in late winter resulted in the biggest variation in the population growth and at the same time also impacted the survival chance of juvenile albatrosses at the sea during the first year.

The effect of climate change have done worst to these creatures as the population growth rate of albatross seabirds have declined by 5.3 percent which otherwise live upto 60 years and this was studied by  by the ecologists from Woods Hole Oceanographic Institution in the United States and French National Centre for Scientific Research (CNRS).

Albatrosses are believed to be the most loyal and legendary of all birds. These birds take time to select their mate and once they meet their right mate they celebrate the union with a wedding waltz.

With divorce rate of 0 per cent these birds were said to be the most faithful ones amongst the entire clan as Noah Strycker says, “to see what real devotion is like, you need to spend some time with an albatross.”

Despite being known for its dedication and loyalty for its mate, the researchers have found that due to the drastic change in the environment these pairs of birds are divorcing more often now-a-days.

Scientific American elaborates the purpose of the albatross species “marriages” as having a “practical purpose: staying with the same partner builds trust, which is essential as the pair alternates between lengthy foraging trips and egg-incubation duties.”

As per a study by the scientists of the Royal Society, “divorce” amidst the creatures is “a strategy  used to correct for suboptimal partnerships….informed by measures of previous breeding performance.”

The pairs of these birds stay together only when they succeed in breeding or else tend to split if they fail. However the researchers write, “The environment affects the productivity and survival of populations, thus indirectly affecting divorce via changes in demographic rates.”

As per the Guardian, “Albatrosses, some of the world’s most loyally monogamous creatures, are ‘divorcing’ more often – and researchers say global heating may be to blame.” The researchers stated that they found that “divorce rate varied across years (1% to 8%). Individuals were more likely to divorce after breeding failures.”

They further said that “regardless of previous breeding performance, the probability of divorce was directly affected by the environment, increasing in years with warm sea surface temperature anomalies (SSTA). Furthermore, our state-space models show that warm SSTA increased the probability of switching mates in females in successful relationships.”

The Albatrosses have been the subject of study for the researches across the globe since a long period now and they in their studies points that “For the first time, to our knowledge, we document the disruptive effects of challenging environmental conditions on the breeding processes of a monogamous population, potentially mediated by higher reproductive costs, changes in phenology and physiological stress.”

Nevertheless, the studies says that human activities are the sole reason for the same.