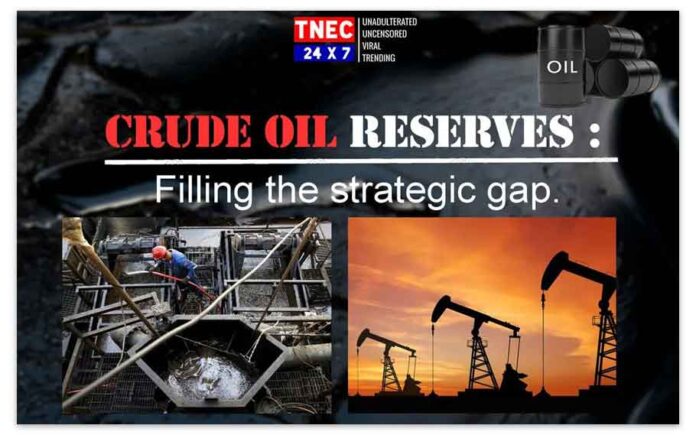 Why is India filling its caves with crude oil? Is there any strategy behind it? Is India trying to hide oil storage in caves? Is it trying to save and use oil in the best way possible like as a renewable resource? So many questions arise when we think about crude oil and the reservoirs that are crafted underground for oil storage.

In 2020, Saudi Arabia initiated a price war on oil with Russia, facilitating a 65% quarterly fall in the price of oil. The price war was triggered by a break-up in the dialogue between the Organization of the Petroleum Exporting Countries (OPEC) -which includes the following countries namely- Algeria, Angola, Congo, Equatorial Guinea, Gabon, Iran, Iraq, Kuwait, Libya, Nigeria, Saudi Arabia, United Arab Emirates, Venezuela.

Russia walked out of the agreement, leading to the fall of the OPEC+ alliance. Oil prices had already fallen 30% since the start of the year due to a drop in demand. The price war is one of the major causes and effects of the ensuing global stock-market crash.

Generally what we usually get to see in caves are mining, water spills, but in India, we can see that the caves are being used as tanks or reservoirs for storing oils. Basically, India is said to be the net importer of crude oil. In today’s world, oil has become strategically important as the economy cannot run effectively without oil. The supply of oil should be uninterrupted, cheap and be used more safely and strategically possible.

Now, first, let’s talk about the history of crude oil prices in India- the highs and lows. When it comes to the fluctuation of oil prices, it has a vast graph of ups and downs. According to Our World in Data, especially in the nineteenth and early twentieth century, the global crude oil prices are found to be relatively consistent.

But in the 1970s there was a significant increase in the price of oil all over. Again in the early 1980s, oil prices experienced a great decline. In 2008 again, the price reached its peak and there occurred many problems. In 2016, the average price of oil dropped. Then in the period of pandemic and the 2020 Russia-Saudi Arabia oil price war, the price dropped by 80% and the demand also decreased globally with the lockdown period.

Then there came concern for the inadequate storage capacity of oil firms. The ongoing pandemic also threatened to continue the demand for oil and the prices to be struck. In 2021, the prices rose high marking the highest since the beginning of the pandemic. With the highs and lows of crude oil price, let’s see how is it having its impact or effect on the Indian economy. We all know rising oil prices is a great threat to the Indian economy.

The increase of 15-25% of oil prices in a year will have a tremendous impact on the Indian economy in various ways. Oil prices directly affect the price of goods made with petroleum products. Oil prices also indirectly affect the cost such as transportation, manufacturing and heating. So we can see the direct, as well as indirect effect oil, has on our Indian economy because it is a necessity and requirement of every human being. Also direct and indirect relationship is found between the demand and supply of the production.

Let’s now focus on why is India storing crude oil in underground caves? The main motive was to buy oil at least drop price and when India got the opportunity to import oil at a great deal, they imported oil in large quantity and for storing them caves came out to be the best option because the humidity level in the caves is maintained, there is no source of sunlight and exposure to openness.

If in future any attacks are held, then caves will not be harmed and hence the oil will be at a safer place. India through storing oil at caves also targeted that if by chance oil stops importing, then for at least ninety days there can be effective functioning of all the essential activities.

This step is a very great step initiated by the Narendra Modi government for establishing underground crude oil storage in Odisha, Karnataka to increase the emergency stockpile. The storage capacity of these two Strategic Petroleum Reserve (SPR) facilities only will be 6.5 Million Metric Tonne(MMT). Also in Vishakhapatnam, Mangalore and Padur, underground rock caves for storage is build for 1.33 MMT, 1.5MMT, 2.5 MMT respectively.

Everything has its own pros and cons. If we look at the negative side, it can have an impact on the ecology, if not looked after properly. The most essential issue associated with underground crude oil is the prevention of oil from leaking out of the storage caverns.

If leaked, it can create a loss of the stored product and contaminate the groundwater, thus leading to environmental hazards. It also holds toxic material, such as gasoline and waste oil, which contain dangerous substances that can cause cancer and harm developing children and if the chemicals move through the soil it can pollute groundwater. There is no safe level of exposure to many of these toxic substances. And on the positive side, it is the safest means of storing hydrocarbon oil reserves and is specifically built to provide cushion during external supply, distribution and to ensure India’s energy security.