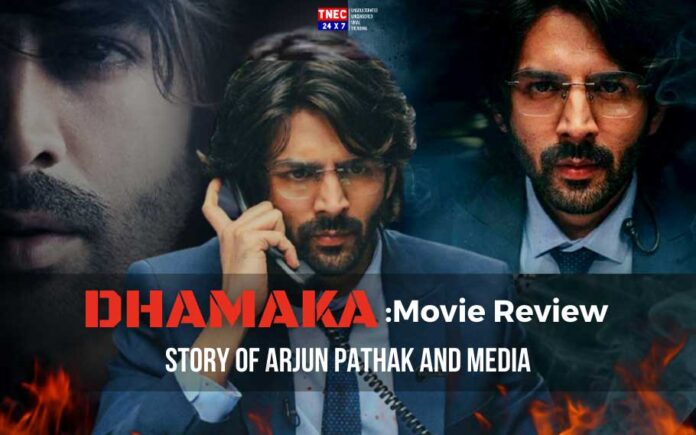 “Dhamaka“- the latest Hindi film on the very popular OTT platform “Netflix” is a less than 2-hour film that is a reflection of Indian Media and its internal politics without any deliberate accusations.

The film covers the story of how three laborers who worked at the Bandra-Worli Sea Link as construction crew and unfortunately died while working by falling into the sea.

The worst part was that they were exploited and were soon forgotten by the world around them. No help from the government came for the families of these laborers who died working on government projects like the construction of Sea Link.

The story of these three workers did not even make it to the national television which ignited a feeling of revenge on a person who identified himself as Raghuveer Mahta- one of the deceased workers over the phone to Arjun Pathak- a journalist from Bharosa TV.

Raghuveer, who threatens to bomb the bridge Sea Link, only demands an apology from a politician whom he accuses to be the reason behind the deaths of these laborers.

Does Raghuveer receive his apology with the help of Arjun Pathak or does he successfully bomb the bridge? Watch the film on Netflix now to find out.

The film has been directed by Mr. Ram Madhvani starring Kartik Aryan as the lead role with Mrunal Thakur as the supporting lead and is a remake of the South Korean film “The Terror Live”.

Although it’s a remake, the director has successfully portrayed Indian media and reflected the politics and dirty corruption involved behind it. The film reflects the race of Indian Media caught up between humanity, TRP, and hunger for high ratings.

“Dhamaka” deserves much appreciation for completing its shoot within just 10 days. One can notice while watching the film that most of its scenes are shot indoors, using VFX animation and very few outdoor shots have been taken. As a low-budgeted film with just 10 days of shooting, Dhamaka is an excellent film for viewers to watch and have a great time.

Talking about the direction, Ram Madhvani did an excellent job throughout the whole movie. Each of the scenes in the film is perfectly made that gives the viewer an idea of modern-day media which is more about business and making money rather than actually being the “Fourth Pillar of Democracy”.

The storyline of the movie is also great as it tries to imitate how a media organization actually works and reacts to every small and big incident happening around.

The power of politicians that have somehow paralyzed honest reporters and the hunger for ratings, neverending competition among the other media houses have unfortunately failed to raise their concern on issues that require much attention and coverage.

The best part of the film was how it has shown reporters and big media house owners turning into power-hungry, heartless creatures looking for something sensational every second.

When it comes to acting, Kartik Aaryan has already proved his skills to low-budget big hits like Pyaar Ka Punchnama 1 and 2. His rom-com “Sonu Ki Teetu Ki Sweety” also gained immense appreciation among the viewers and was an instant hit along with a few others.

However, seeing Kartik Aryan in the intense role is new and quite unusual. Earlier he was also seen playing a different role that was out of his comfort zone in Love Aaj Kal 2 but the film did not do well in Box office.

Kartik Aaryan in “Dhamaka” has proved that he can work out of his comfortable comic character and roles with equal intensity. Apart from Kartik, Mrunal Thakur did extremely well in playing her character although she did not have much screen presence in the film.

While talking about the acting skills, one cannot forget the fabulous job done by Soham Majumdar who played the negative characters along with Amruta Subhash. These actors whom we do not see in big movies very often prove to be excellent actors whenever they take up projects.

The film does not use symbolism as a medium to express. No such strong signs and symbols have been found that carried any deep or internal messages for the audience. However, the strong delivery of dialogues deserves to applauded in “Dhamaka”.

Although the film was a very thrilling experience for the viewers, there are a few loopholes in “Dhamaka” that cannot be overlooked. The screen presence of Mrunal Thakur could have been longer and way better in the portrayal of the character as her role was the only positive thing in the film from the start. Since the role was an important part of the moral of the film, Mrunal Thakur could have used it more.

Another loophole was that the film is a remake. Well, “Dhamaka” could have been a much better and influential film if it was not a remake and if the director tried to make it a film on Indian Media with research on big and closed cases of India. A film loses its artistic excellence when it is a remake.