Thinking of venturing into journalism? Read about these must known 5 ethics of journalism 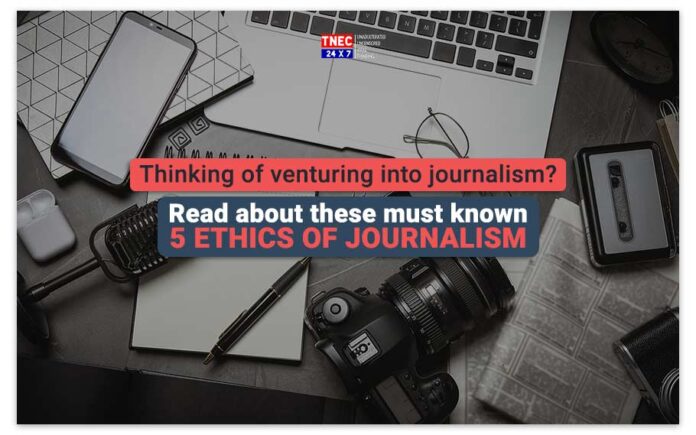 Journalism is a widespread term and also pretty well-known all over the world. To quote a definition from wikipedia,”Journalism is the production and distribution of reports on current events based on facts and supported with proof or evidence”. Almost every form of media is associated with journalism including print, television, radio, Internet, and, in the past, newsreels.

Concept of journalism across the world

Journalism across the world has different implications with respect to the situations of that particular region. In some places journalism is not fully independent as it is controlled by the government. For example: North Korea and China where the media is controlled by the government. And in case of democratic countries, journalism is mostly free with little to no restrictions.

Now to talk about the core subject of this article, i.e, 5 core ethics of journalism.

Inception and purpose of ethics in journalism

These codes or ethics of journalism are intended to induce self-monitoring and self-correction among the ones associated with this field. These are put in place to ensure reliability of any information through prescribed practices and also to avoid situations which may come in the way of reliability and accuracy.

A singular truth about journalism is, one must remain true to the truth and stand vigilant against any form of misinformation. Surely, a journalist cannot always guarantee the truth out of everything, however one must make sure one doesn’t stray away from root facts by keeping check of relevant facts and sources.

It is a desired aspect from journalism or journalists. Through this aspect, it tries to convey that journalism must be independent from personal interests and shouldn’t be part of some political affiliations that just pushes propaganda to the public. However, in the present days it can be said that this aspect is far from fulfilled.

Similar to ‘independence’, this aspects talk on comprising the above two aspects. For example: A story always has two sides, so being an entity as huge as it is, journalism must look into the matter to its source before trying to pass a judgement to the public. For, impartial journalism builds trust and confidence above all.

This term is easy to understand but hard to apply as seen in the present days, journalists and journalism as a whole violating human values and moralities. However, in order to retain the confidence and trust of the people in journalism, one must not cross a certain line which will hurt people’s sentiments and their beliefs.

This aspects holds up the professionalism and responsibility of journalism. Being overseen by humans, errors are bound to made. However, the way an journalist or an entity rectifies their mistake is what’s important. If a mistake is commited, one must full responsibility and express their regret with sincerity.

Surely, the advancement of technology has changed the way information is conveyed across the world. Through the advancement of the internet, information reach people at a much faster rate. And due to this very reasons, information are susceptible to being faked out, distortion etc. Now it is a high time to stand against such misinterpretation of values of journalism and staying true to the true values. One that works for the masses, not against it.

Also Read: Top 5 skills in demand! Do you have one of these?