Human Rights Day: Everything you need to know 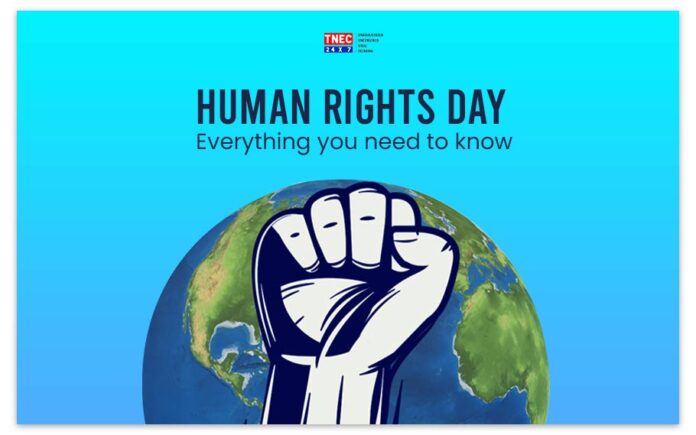 Why is the day celebrated:

The Day was adopted by the United Nations General Assembly on December 7, 1948 to ensure that each and every individual across the world enjoys their rights freely irrespective of any caste, gender, race, religion, sex, nationality and so on. It is since then that December 10, is observed as an important day to remind humanity of the rights they deserve.

The need to be vocal about one’s rights came way later in the past. Following the mass extermination of the Jews, people with disabilities, homosexualsand others by Nazi Germany shook the world, bringing together the need to protect the rights of people from various walks of life, against the inhumane abuses of governments and rulers.

Hereafter, the governments of different countries across the world pledged to the formation of an international body (the United Nations) to safeguard the rights of people, especially the one lacking ‘power’. The essence of these human rights principles first found its place in US President Franklin D. Roosevelt’s State of the Union Address in 1941. In his address, commonly known as ‘Four Freedoms’, the 32nd US President talked about a world that should stand on four essential freedoms — freedom of speech and religion, and freedom from want and fear.

It was Roosevelt’s speech, when the voices from across the world came together to support the drafting of the United Nations Charter in 1945 in San Francisco.

Finally it was on February 16, 1946, when the UN established a Commission on Human Rights to draft a document that will articulate the fundamental rights and freedom proclaimed in the Charter. Under the ‘forceful’ leadership of Anna Eleanor Roosevelt, the former first lady of the US, the Commission came out with the UDHR, which was adopted by the 56 member countries on December 10, 1956.

As announced by the United Nations the theme of Human Rights Day for 2021 will be “equality”. It took the theme from Article 1 of the UDHR, which says: “All human beings are born free and equal in dignity and rights.”

-Human Rights are the most significant asset for an individual to live because these are basic rights which solely belong to us.

-These rights are important because they are like shields for us. The implementation of human rights over the years have somewhat decreased the chances of abuse, neglect and isolation.

-Most importantly, these rights give us power and enable us to speak up and to challenge poor treatment from a public authority.

How are Human Rights relevant:

-In the presence of Human Rights, an individual must never be refused life saving medical treatment regardless of what that particular person is.

-He or she must be given enough to eat and drink whilst I am in the care of an institution.

-He or she should not be discharged from hospital if that individual is unable to look after itself, if there is no care in place to support them.

-If an individual’s death took place under suspicious situations or in an unexplained manner then an effective inquest must be carried out by the legal authorities.

Human rights are protected by international and national laws and treaties globally.

The Universal  Declaration of Human Rights holds the Guinness World Record as the most translated document. Yet, far too many people are still unaware of their basic rights as human beings.

It is however, in the lights of the prevailing pandemic that the need for the proper practice of these human rights have attained meaning.

Guwahati Girl brings Glory to the state; gets selected by Balliol College of Oxford University to study Sanskrit

Priyanka Chopra says: she feels someone from northeast should have played Mary Kom

Kaziranga National Orchid and Biodiversity Park- All you need to know

Shops in Shillong to close by 8 pm; Order issued

First Janshatabdi train between Manipur, Tripura and Assam gets under way to boost trade and tourism