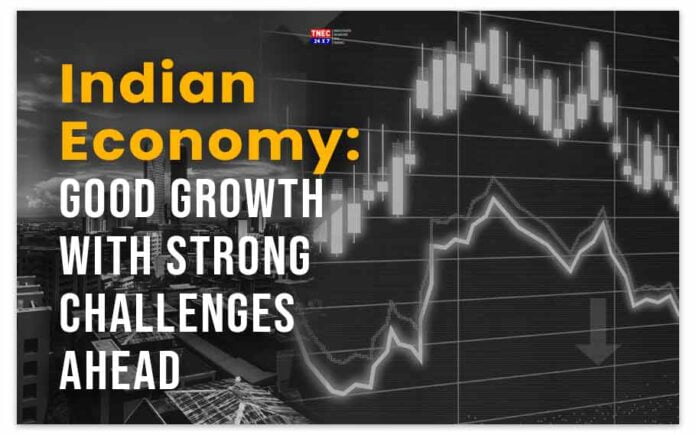 The Indian economy grew again in the July-September quarter, marking the fourth straight quarter of expansion. India’s GDP increased by 8.4% year over year, compared to a contraction of 7.4% the previous year.

During the second quarter, the economy continued to grow, indicating that it was on the mend. The reopening of the economy after the second wave of the COVID-19 outbreak benefited India’s economic growth.

According to an SBI research report-Ecowrap, India’s gross domestic product (GDP) is expected to expand by more than 9.5 percent in fiscal 2021-22.

The growth rate in the April-June quarter of this fiscal year was 20.1 percent, according to figures provided by the National Statistical Office (NSO) on Tuesday.

Challenge of the new COVID variant and high commodity prices

Most experts currently forecast growth in the financial year (FY) 2022 to range between 9.3% and 10%, with a slight negative, providing that the COVID-19 wave does not occur again. Apprehensions remain high, however, given the addition of an unknown variable in the form of the novel coronavirus variation omicron, which has taken the world by storm.

“While capacity utilization may have increased in the last quarter, private investment may yet take longer to rebound as corporations and banks remain risk conservative in the face of looming uncertainties. The manufacturing industry would be challenged by high commodity prices and global supply shortages. The development of the new COVID version has added to the system’s unpredictability.”

“If the uncertainty persists or worsens, it would hurt business and consumer sentiment, as well as economic growth, “said Rajani Sinha, Knight Frank India’s Chief Economist and National Director of Research.

“Due to a complete lockdown in April-May and a partial lockdown in June-September, India’s real GDP fell by Rs 11.4 lakh crore (YoY) in the first half of FY21. In H1FY22, the real profit was roughly Rs 8.2 lakh crore. To get back to pre-COVID levels, a real loss of Rs 3.2 lakh crore needs to be recovered”, SBI Research, Dr. Soumya Kanti Ghosh

According to a finance ministry assessment, India is on its path to becoming the world’s fastest-growing major economy, armed with the requisite macro and local growth factors.

“India is now the world’s fastest-growing major economy, with a growth rate of over 8% in the second quarter. Following the second wave earlier this year, we saw economic activity return to normalcy. After two-quarters of negative growth last year, this is the fourth straight quarter of positive growth. The contribution of the real estate and construction sectors to growth is obvious as a result of government spending.”

“On the back of a healthy monsoon, agriculture has also contributed. Despite the potential of inflation derailment, I hope the RBI continues to support growth with its supportive policies,” Eqaro Guarantees CEO Vikash Khandelwal stated.

CARE Ratings agrees, forecasting 9.1% growth for the entire fiscal year. “Given the uncertainty surrounding the size of the economic recovery, the RBI is projected to maintain its growth focus and maintain an accommodating monetary policy stance even as it moves toward gradual support normalization.”

India’s economic downfall and the pandemic

In 2020-21, India’s Gross Domestic Product (GDP) shrank by 7.3 percent. To put this decline into context, consider that India grew at a rate of roughly 7% per year from the early 1990s until the epidemic reached the country.

India, like the rest of the world, is dealing with a once-in-a-generation pandemic – and is wishing it away. Even before the COVID-19 outbreak, India’s economy had been slowly deteriorating under the current system.

Several additional factors contribute to the economy’s slowing growth, from the rupee’s and dollar’s exchange rates to the fiscal deficit.