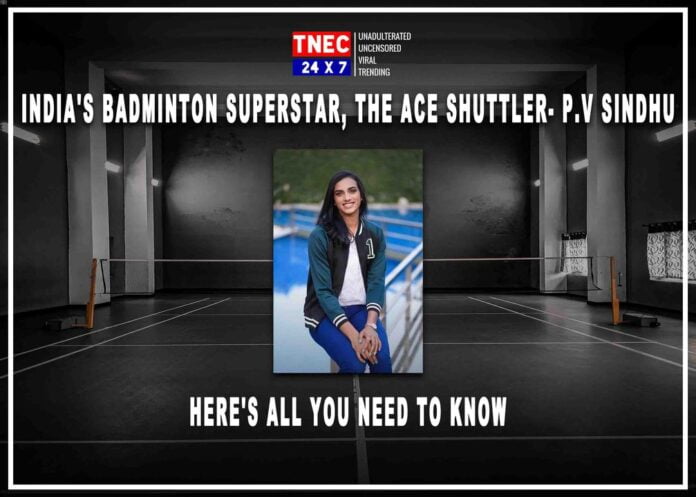 In recent times if any name has been synonymous with the sporting world, it is none other than the badminton superstar P.V Sindhu.

The reigning world champion and the first ever Indian Woman to win consecutive Olympic medals after she clinched Bronze for India after a straight-game in the women’s singles third-place play-off in the Tokyo Olympics 2020.

Pusarla Venkata Sindhu is arguably India’s most prolific badminton star of the 21st century. As the first Indian woman to win a silver medal at the Rio Olympics 2016 and recently a bronze medal at ongoing Tokyo Olympics, she also won gold at the BWF World Championships, the World Champion is in a class by herself when it comes to Indian badminton in the 21st century.

Along with fellow badminton player Saina Nehwal and boxer Mary Kom, she has been one of the shining beacons for sportswomen in India. Currently ranked at world number seven, shuttler PV Sindhu remains as one of India’s biggest hopes in badminton.

All about P.V Sindhu

PV Sindhu was born on July 5, 1995, in Hyderabad, Andhra Pradesh to parents who were both volleyball players at the national level, with her father PV Ramana has won the bronze medal at the 1986 Seoul Asian Games. As a result, sport already coursed through her veins from the start.

While her parents may have been volleyball players, it’s badminton that caught PV Sindhu’s fancy after watching her former coach Pullela Gopichand in action, and by the age of eight, she was a regular at the sport.

However, the tables were turned soon as Gopichand was the one in awe after watching the young PV Sindhu in action, who had joined the academy bearing his name. Winning junior badminton titles like the All India Ranking Championship and the Sub-Junior Nationals, PV Sindhu made it clear she would be a player to reckon in years to come with once she made it to the international stage.

In 2009, PV Sindhu won the bronze medal in the sub-junior Asian Badminton Championships and a year later, she bagged singles silver in the International Badminton Challenge in Iran

One of the peculiarities about the ace shutter career graph is her steady improvement at annual events year-by-year. In her apparent at the 2012 Asian Junior Championships when she won the gold medal after scoring a bronze the year prior. This pattern was repeated at the prestigious World Championships too. After two bronze and two silver medals between 2013 and 2018, she finally held the gold in 2019 after comprehensively beating Japan’s Nozomi Okuhara.

2014, PV Sindhu won bronze in women’s singles. Four years later, at the 2018 CWG in Gold Coast, she better it up with a silver and a gold medal in the singles and mixed team badminton event respectively. However her biggest achievement till date however, remains the silver medal at Rio 2016 and the recent Bronze in Tokyo 2020.

By defeating all her opponents in Rio 2016, it’s Carolina Marin of Spain that left her defeated in the final for the ultimate gold. Carrying all the high hopes in the Tokyo Olympics 2020 she performed valiantly until in her semi final bout when she unfortunately lost against the World No. 1 Tai Tzu Ying. However, the reigning world champion bounced back from the defeat to beat higher-ranked He Bingjiao of China in the bronze medal match.

Sindhu has been awarded with may accolades and awards for stupendous performances:

In August 2016, she was awarded the Highest Sporting Honour of India– Rajiv Gandhi Khel Ratna.

In September 2013, PV Sindhu was awarded the Arjuna Award for outstanding performance in sports.

Inspite all her success and glory what P.V Sindhu remains as an Inspiration for millions of young boys and girls for picking up the badminton racket and bring more such glory for the country.

We wish the ace shuttler all the very best, and continues to win more such medals and make the entire country proud.