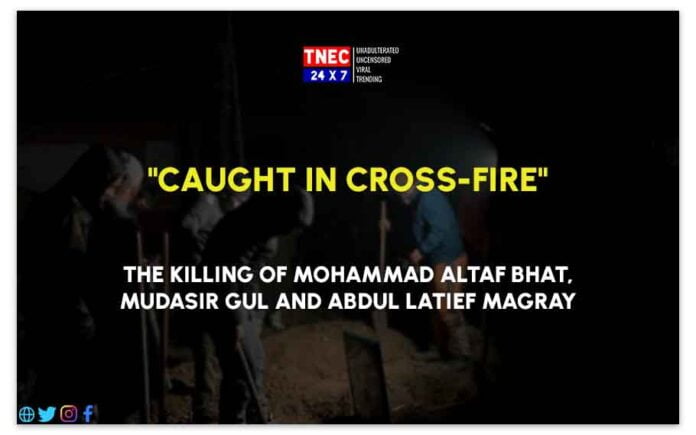 Amid the sobs and cries at the late-night funeral attended by hundreds of people mostly youth, Abdul Majid, elder brother of Altaf Ahmad Bhat, 45, said “I know you are angry and your blood is hot. I respect your emotions which can burst like a volcano but be peaceful.”

The never-ending bloodbath in the valley of Kashmir has yet again claimed the lives of innocent locals of Kashmir. This time, the ill-fated involved Altaf Ahmad Bhat and Dr. Mudasir Gul, both of them residents of Kashmir.

After an array of targeted killings of members from the minority communities, followed by an outcry in Kashmir, security officials rained down heavily against the militants responsible for these attacks.

In one of the anti-terrorist ops, Altaf Bhat, a prominent local businessman, and Dr. Mudasir Gul, a dental surgeon, were killed in Hyderpora on November 15. Initially, the Police had claimed that they were shot by terrorists but later declared they may have been killed in the crossfire.

The police also claimed both men were “terror associates” – a charge that provoked a furious reaction from family members and critics of the Jammu and Kashmir administration.

However, the families have alleged Mr. Bhat and Dr. Gul were killed in cold blood, as was a third person – Amir Magray – whom the police called a “hybrid terrorist” – working as a helper in the doctor’s office.

Magray’s father, Abdul Latief Magray, has insisted his son was killed in a staged encounter. Magray is a known anti-terrorism crusader from a remote village in the Ramban district, who made headlines after killing a terrorist with a stone in 2005. He is also the recipient of an Army citation.

Protest in demand for bodies

Following the killing of the three individuals, their bodies were not handed over to their respective families due to “law and order problems”. Instead, the bodies were buried in Handwara, which is over 100 km from Srinagar.

According to TimesNow, this is the first time that bodies buried under a police watch have been exhumed after the COVID-19 pandemic.

The family members of Altaf Bhat, and Dr. Mudasir Gul, held a sit-in in demand of the return of the bodies. The Jammu and Kashmir Police, however, detained and shifted the protesting family members.

Further, the family members alleged that power was cut off before the police action against the protesters. In a video, the protesters, sitting in freezing temperature under candles at the Press Enclave, were seen being dragged and pushed into police vehicles. “Kill me too,” one of the relatives of Bhat was seen saying to the police. A scuffle also broke out between the protesters and the policemen.

She said the family members had met the top civil and police officer in Srinagar on Tuesday. “They had expressed solidarity with us and assured the bodies will be given back. But they are yet to approach us. We saw no official visiting us at the protest site during the day,” she said.

After a prolonged protest in demand for the bodies, the Jammu and Kashmir administration, on Thursday night, handed over the bodies to the families of the dead for the last rites.

The bodies were exhumed at around 5:30 P.M on Thursday from the two graves located at a far-off hillock, Wadder Zachaldara, in north Kashmir’s Handwara in front of a local magistrate.

However, the body of third-slain local, Amir Magray, son of Abdul Latief Magray, who has won the bravery award for killing a militant with a stone, was yet to be exhumed or returned to his family.

Ramban District Development Council (DDC) chairperson Shamshad Shan on Saturday, even notified of protests if the authorities did not hand over the body of Amir Magray whose kin claim he was innocent, to his family members.

According to the police, Magray was a militant and was killed in the encounter. However, Magray’s father Abdul Latief refuted the claim and appealed to the L-G to ensure justice for the family. On Friday, Latief met the Ramban DC, seeking the return of his son’s body.

Manoj Sinha, Jammu, and Kashmir Lieutenant Governor on Thursday ordered a magisterial inquiry into the encounter in Hyderpora, Srinagar, November 15 after three families claimed that the three deceased out of the four killed during the operation were “civilians”.

“A magisterial inquiry by an officer of ADM [additional district magistrate] rank has been ordered in Hyderpora encounter. The government will take suitable action as soon as the report is submitted in a time-bound manner. The J&K administration reiterates the commitment of protecting lives of innocent civilians and it will ensure there is no injustice,” a statement issued by Raj Bhawan read.

Lieutenant Governor Manoj Sinha has said that whosoever is found guilty in the Hyderpora encounter won’t be spared and the administration is committed to ensuring justice.

“One incident has taken place as far as the security situation is concerned. I want to assure people those found involved won’t be spared,” he said addressing a gathering of members of the Sikh community in the Jammu region on the occasion of Guru Purab.

He said that in three-to-four days, things will be more clear and “he would be able to discuss more on the issue.”