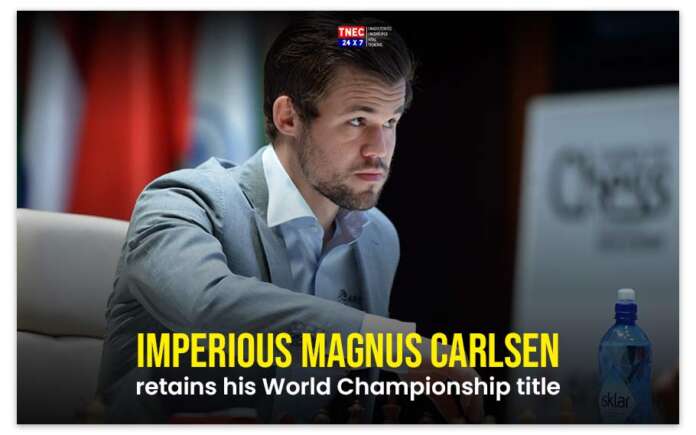 “It’s hard to feel that great joy when the situation was so comfortable to begin with, but I’m happy with a very good performance overall,” said Magnus Carlsen, retaining the world championship with a fourth win over Ian Nepomniachtchi in the 11th meeting in Dubai.

A tightly knitted match that seemed tied to a draw instantly came undone when the Russian challenger made a dreadful slip that gifted Carlsen the game and match, punctuating a dramatic breakdown that started a week ago when Nepomniachtchi came up short in the sixth game, a psychologically taxing 7hr 45min epic.

Carlsen’s winning score of 7½-3½ with three games to spare is the most lopsided result in a world championship match since José Raúl Capablanca’s triumph over Emanuel Lasker exactly 100 years ago in Havana.

The challenger, Ian Nepomniachtchi, managed the first 5 games in fashion, showing exceptional preparation while maintaining the score tied against the world number one — who had already gained plenty of experience in similar situations.

Then came game 6, the moment of truth in the confrontation. In a marathon game, which is likely to be analysed extensively in the near future, the world number one, Magnus Carlsen finished on top after an intense battle.

The game lasted almost 8 hours and, in hindsight, had a major impact on Nepo’s psychological shape. What followed was nothing less of a catastrophe for the Russian, who lost three games after horribly blundering extremely simple tactical tricks — especially for players of the highest level.

But not long after, Nepomniachtchi made yet another shocking blunder – his third on a pawn move in the past week – attacking black’s rook with 23 g3.

Carlsen, whose right armrest had broken off just before all this happened, reacted visibly surprised once again.

The World Champion Carlsen found the winning move within a minute and a half (23 … dxe3) and from there the game and match were all but a handshake away. When the Russian finally resigned after 49 moves and 3hr 21min, the Norwegian’s fifth win in five world championship matches was done and dusted.

“I didn’t expect it go quite like this,” said Carlsen, who brings home a 60% share of the €2m (£1.7m) purse for winning before the tiebreak stage. “I think it was just a very good professional performance overall. No regrets at all, just very satisfied.”

He added: “After five games there were five draws and I’d had very, very few chances to play for anything more. Then everything kind of clicked and after that it all went my way. You don’t expect to necessarily run away with it in a world championship.”

Of his fatal blunders in the eighth, ninth and 11th games, a rueful Nepomniachtchi said: “These things which happened here, they have never happened to me at basically any events … In my career I lost quite some stupid games but not as many in such a [short] time.”

When asked about how he is going to celebrate the win, Magnus Carlsen said, “I’ll be celebrating by playing the World Rapid and Blitz Championship!” (rearranged to be played in Warsaw from December 26-30)

Also Read: WHAT TO WEAR IN WINTER? 5 EASY OUTFITS FOR WOMEN