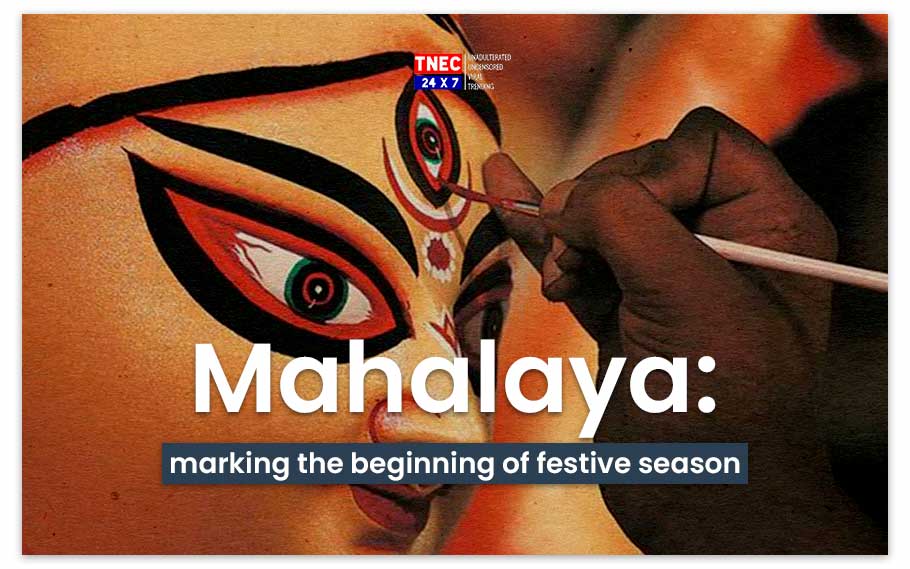 ‘Mahalaya‘, doesn’t the term ring festival bells? During our childhood we remember waking up early even before the sun rises and going for a morning walk with my mother. And also listening to the radio broadcast of ‘Mahishasur Mardini‘. The soulful slokas of Maa Durga’s triumph over the demon king Mahishasura. This year, Mahalaya is on 6 October and Durga Puja will be celebrated from 11-15 October.

What is Mahalaya and why is it celebrated?

Maa Durga is considered as the goddess of power. Mahalaya is an auspicious day for Bengalis, which is celebrated with great enthusiasm. This day marks the beginning of Devi-Paksha and the end of the Pitri Paksha. Hindus consider Pitri Paksha to be inauspicious, because shraddha or death rites are performed during this period which is a 16-day lunar period during which people remember and pay homage to their ancestors.

We have this auspicious day to remind us how Goddess Durga vanquished the evil demon Mahishasura. It reminds us of the power of truth, courage and of the fact that good will always triumph over evil in the end. Mahalaya is the beginning of the 10-day annual Durga Puja festival.

It is believed that on Mahalaya, Goddess Durga begins her journey to the Earth from her home in Kailash along with her children Kartik, Ganesha, Lakshmi and Saraswati as she visits her paternal home. And the vehicle she uses to descend also changes every year. It could be a boat, an elephant or a horse.

It is also said that on this day a ritual called ‘Chokkudaan‘ is followed where the sculptors making Durga idols paint the eyes of the Goddess Durga. And the ritual is followed to call the Goddess with a prayer to wake up and open her eyes.

Goddess Durga, it is believed, stays for five days to remove evil from earth before returning to Lord Shiva, at Kailash on Dashami. Mahalaya is celebrated in the entire country, people who believe in Maa Durga wait for this day the entire year. It marks the beginning of Navratri and Durga Puja both.

Hunger Index: India slides down to 101 from 94 behind Pakistan and Nepal

Assam’s Youth Gamer ‘Insano’ and his dream to shape future in E-gaming: Read to know his story