Malala Yousafzai: A Revolution in herself! 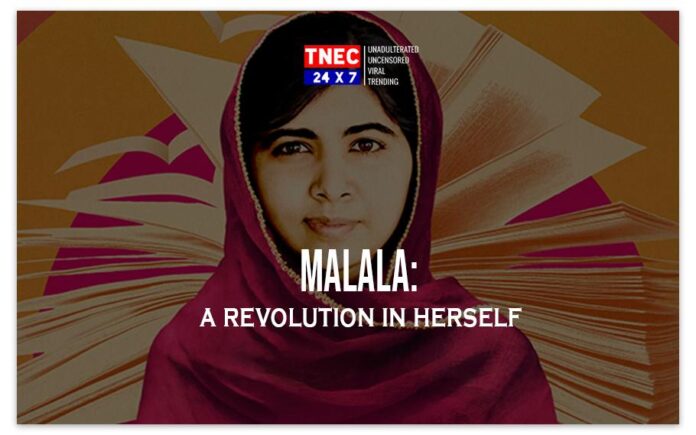 Nobel Peace Prize winner Malala Yousafzai (Malala Yousafzai) posted a blog entry on Podium on August 24 about the torture inflicted on her body for the “wounding of the Taliban.” The 24-year-old was shot in the head by former Pakistani Taliban spokesman Ehsanullah Ehsan in 2012 due to her girls’ education campaign.

“Two weeks ago, while US troops withdrew from Afghanistan and the Taliban gained control, I lay in a hospital bed in Boston, undergoing my sixth surgery, as doctors continued to repair the Taliban’s damage to my body,” Malala said in her blog, which has been published weeks after the return of the Taliban in Afghanistan.

Speaking of the terrible event that changed her life, Malala wrote in her blog, “In October 2012, a Pakistani Taliban boarded my school bus and shot my left temple. The bullet scratched my left side. The eyes, skull, and brain tore my facial nerves, shattered my eardrums, and interrupted my jaw joints.”

Malala asked her friend what happened that day; “Did I scream? Am I trying to escape?” I asked. “No,” she said. “You stood quietly, staring at the Taliban’s face, calling your name. You held my hand tightly, and I was in pain for several days. He recognizes you and starts shooting. You cover your face with your hands and try to avoid it. The next second, you fell on my lap. “Two of my classmates, Shazia and Kainat, were shot in the hands and arms. The white school bus was stained red with blood. My body had bullet scars and many operations, but I don’t remember that day. Nine years later, my best friend still has nightmares.”

At the same time, Malala shared every detail of the operation performed after the bullet was taken from the Taliban. After the operation, in Peshawar, emergency surgeons immediately removed the bone from her left temporal bone to create space for her brain to deal with the injury.

“His swift action saved my life, but soon my organs began to fail and I was airlifted to the capital Islamabad. A week later, the doctor decided that I needed more rigorous care and I should be transferred out of my home country to continue treatment. “Malala said.

Due to being in an induced coma, Malala said that she “cannot remember anything from the day of shooting until the moment I woke up in Queen Elizabeth Hospital in Birmingham.” “When I opened my eyes, I was relieved and realized that I was still alive. But I didn’t know where I was or why I was surrounded by English-speaking strangers.”

All that followed was a severe headache. Her vision blurred. Malala couldn’t speak because she had a tube stuck in her neck. “A few days later, I still couldn’t speak, but I started writing in my notebook and showing it to everyone who came to my room. I have a question: What’s wrong with me? Where is my father? Who will pay for this treatment? We have no money”.

Malala’s half of the face was damaged

Due to the bullet shooting and its consequences, Malala could only recognize half of her face. “The other half is unknown: black eye, gunpowder, no smile, no frown, no movement”. They shaved half of my hair. I thought the Taliban did the same to me, but the nurse said the doctor shaved her head for surgery.

She did her best to stay calm, thinking about finding a job to earn money after being discharged from the hospital: “I believe in my own strength. I believe I will get out of the hospital, run like a wolf, and fly like an eagle”. However, the reality at that time was different because most of her body cannot be moved.

At the same time, one day, Malala touched her abdomen and found that it was hard and stiff. “I asked the nurse if there was a problem with my stomach. She told me that when the Pakistani surgeons removed part of my skull, they moved it to my stomach, and one day I will have another operation to put it back in my head.”

Then in the UK, doctors performed a cranioplasty and installed a titanium plate in her skull to reduce the risk of infection. “They removed the skull from my stomach. Today it is on my shelf.”

Also, in her blog post, Malala said that after her family joined her in the UK, she started physical therapy and rehabilitation. “About six weeks after I first arrived in the UK, the doctors decided to treat my facial paralysis. To do this, they cut my face off again and tried to suture my severed facial nerve again, hoping that it would finally recover. grow and promote movement. “

In the end, Malala said: “Nine years after being shot, I am still recovering from a bullet. But in the last four years, the Afghan people have been shot by millions of bullets. I do not know if their cry for help has not been answered, my heart is broken”.

Also Read: Malala Yousafzai says she is ‘Deeply worried’ about the safety of women in Afghanistan