A market to buy and sell brides! Read about the bizarre bride market of Bulgaria 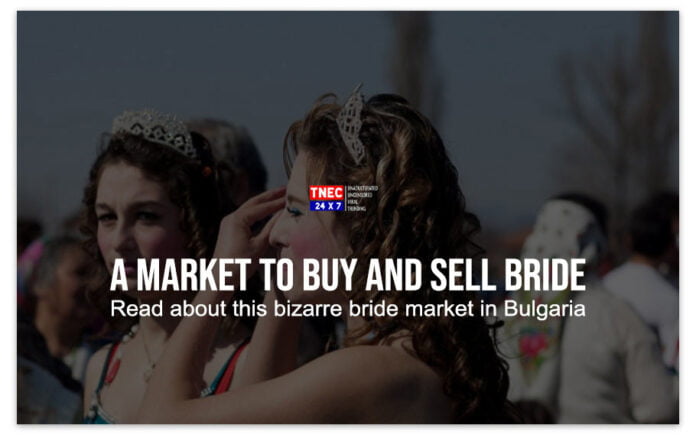 With the advancement of modern technologies and the forward marching of progressive mentalities, one would expect the slow death of worldwide traditions that are centuries old. However, one such tradition still remains, which is the ‘bride market’ of Bulgaria. Despite the blatant disregard for basic human human right, this tradition in continuing to this day.

Origin of the bride market

This market or to say fair is organised by the Kalaidzhis tribe in the region of Stara Zagora city of Bulgaria during every spring. It is one of the traditions of the Kalaidzhis. As the market commences one can the see women with heavy make-up and shining fine gold ornaments. As bizarre as it sounds, it is to be noted that this kind of market are organised annually in the whole of Bulgaria.

What goes on in those markets?

Here the so called brides aren’t allowed to meet or date any other men before they are sold off to their potential suitors. And one prime criteria is that the woman must be a virgin and if not she’d be tagged as a ‘whore’,’slut’ among the tribe. It is found that the normal price of a brides starts from $390-$500 and goes upto $5,000 depending upon their aesthetic appearances.

The state of women that are being sold off

The blatant disregard for basic human rights is clear as day in such scenario. However, the Kalaidzhi girls has no other choice to surrender to the age old custom. The women are treated as nothing more than a tool to attract men. So in order to girls of the community are allowed to spend of accessories and other stuffs such as clothes just for the sake of attraction in such markets.

Current scenario and education of those women

It is also to be noted that the Kalaidzhi tribe is a population of Romanian Gypsies. These people are severely stigmatized by the non- Romas. Which is the reason that the Kalaidzhis lack from availing basic necessities such as proper education. Which in turn forces the community to stick to the bride selling tradition. In this community or in Bulgaria as a whole, only 10 percent of girls are educated above secondary level and others just stay as housewives.

According to the Kalaidzhis, the tradition is essential for them to survive

After facing generation of stigma and discrimination, the Kalaidzhis, which make up just 4.4 percent of the country’s population expressed the tradition as their need to survive in the new world. Being ostracized from the society, the gypsy community has firmly held on to the twisted tradition for the sake of their so called survival.

Is their any political intervention?

Due to the recent coverages by the media, the ongoings are brought into the light before the people worldwide. However, due to the inactivity of local politicians and bureaucrats, no proper steps has been taken as of yet to change the fate of the women and of the Kalaidzhi community as a whole.

For the problem is a pretty complex one. More or less, in order to diminish the dependence of the Kalaidzhis on bride markets for their livelihood, it the duty of local politicians and bureaucrats to try erasing the stigma surrounding them and helping them rehabilitate at first.

Majority of girls in these communities get married at the age of 13-20 years of age. As days move forward , girls there too dream of becoming someone other than a regular housewives. They dream of get education, jobs etc. However, most of them aren’t able to do so because of the compliance to the tradition thereby submitting themselves to their fate.