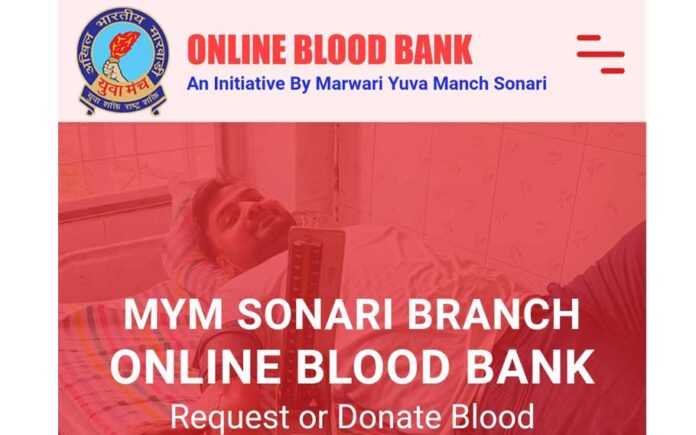 ‘Online Blood Bank’ is the name of the website launched under the initiative of the Marwari Yuva Manch Sonari Branch as a means to meet the blood donations requirements in certain districts of Assam.

Talking to The North-Eastern Chronicle, President of MYM Sonari Nabin Agarwal informed about the website. According to their website, All India Marwari Yuva Manch is a youth-led NGO founded on October 10 in 1977 in Guwahati, Assam.

‘Online Blood Bank’ is a website founded by Nabin Agarwal who is also the president of MYM Sonari Branch. After receiving constant calls from people asking for blood, this website was created with Agarwal’s team and some professionals as there aren’t any blood banks in their district. Through this website, anyone who is willing to donate blood can register themselves and if anyone requires blood then they can directly contact them.

This website is a means to aid the sick and ailing from hearty and selfless blood donors. It has been created as a means to act as a bridge between those who need it and those who care in an efficient, seamless, and reliable manner. Blood donation is important as every contribution counts. Thus, by contributing, ‘Online Blood Bank’ hopes to share its mission of saving lives.

What is a blood bank?

In simple terms, a blood bank is where donated blood from different donors of different blood types is sorted, separated into different components, stored, and then prepared for transfusion to those who require the blood. It may be an independent free-standing separate facility or it can be a part of a huge government or private hospital.

Blood banking is a term that is used for referring to the process of collecting, separating, and storing blood.

Several components of the blood are separated from each unit of whole blood. Red blood cells can be stored under refrigeration for a maximum of 42 days. They are used mostly for the treatment of anaemia. Platelets on the other hand which are used for patients with leukaemia and other forms of cancer can be stored at room temperature for a maximum of five days. Therefore, the compartments need to be separated depending on the content.

Other than for blood transfusion, blood banks are also used for testing infectious diseases. Thus, they also make sure that the donated blood or blood products are safe before they are used for transfusion and other medical procedures.

Not only is the act selfless but it can also be a win-win situation for both sides. According to a report published by the Mental Health Foundation, helping others can improve your emotional and physical well-being, and can also reduce stress.

When you go to a blood bank to donate blood, you will get a free health screening which will be performed by professionally trained staff members. Here, they will check your pulse, blood pressure, body temperature, and haemoglobin levels.

This stored blood is for people who are accident victims, people undergoing surgery, and patients that are receiving treatment for leukaemia, cancer, anaemia, and other diseases.

Lastly, in a process called autologous blood donation, a person who is scheduled for surgery may be eligible to donate blood for themselves.

MYM Sonari Branch has not only initiated such philanthropic moves virtually but also in person.

They have organized several vaccination camps in a systematic and organized manner which has been appreciated and appraised by the local public and the administration. Free oxygen service 24/7 was also provided with several active participants during the second wave of the pandemic when the crisis broke over scarcity of oxygen supply to those who are in immediate need.

To add more, a food drive was also organized by the organization at Charaideo to share food and care to those who can’t afford anything to fill their stomachs.

Their works are not just about philanthropy but more about making people realize how much we can do if we come together and lend a helping hand to those in need, may it be big or small.