Mizoram: The land of blue mountains 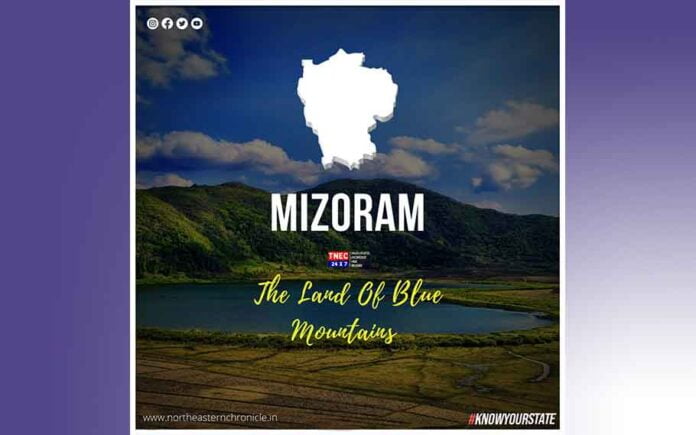 Mizoram is located in the northeastern part of the country, the state of Mizoram shares 722 kilometers long international borders with Myanmar and Bangladesh, and the northern part shares domestic borders with Manipur, Assam, and Tripura.

Mizoram is one of the most sparsely populated states of India. The population density decreases from north to south, owing primarily to a southward increase in humidity and temperature that renders the area less desirable for habitation and Aizawl is the only major city in the state.

The present-day ‘Mizoram’ was historically called Lushai Hills or Lushai District. The term ‘Mizo’ referred to an umbrella name for all the different tribes.

Of their languages the official and most widely spoken is the Mizo ṭawng, which is the common language of all Mizos, belonging to the Tibeto-Burman language family. Besides the other prime dialects are Aso, Chho, Halam, ‘Hinar’, Lai, Lusei, Mara, Miu – Khumi, Paite, and Thado – Kuki.

Music and dance are important elements in Mizo cultural life. Here the music is composed of folk tunes which are largely accompanied by traditional drums, gong, and other native percussion instruments. There is also a long history of flute-playing which is now defunct.

The drums here are made from a hollow tree trunk with a membrane made from cowhide and the gongs, made of brass, are very similar to those found in Myanmar.

Mizo people have several dances that reflect the cultural vibrancy of the place. There are four versions of dance in Mizoram, Chai Lamthai I, Chai Lamthai II, Chai Lamthai III, and Chai Lamthai IV. The most popular Cheraw or the ‘Bamboo Dance’ is practiced by six to eight people holding pairs of bamboo staves on another horizontally placed bamboo on the ground.

Like every other state in the northeast, rice is the staple food of Mizoram and the Mizos love to add non-vegetarian ingredients in every dish. Fish, chicken, pork, and beef are popular meats among Mizos. Dishes are cooked in any available oil.

Also read: CM OF ASSAM AND MIZORAM MEETS TO DISCUSS OVER BORDER TENSIONS BETWEEN THE TWO STATES

Bihu 2022: Date and significance of Magh or Bhogali Bihu festival

5 Tips which will protect You from Covid 3rd Wave