A significant closure of the mysterious death case of Sunanda Pushkar! Read to know 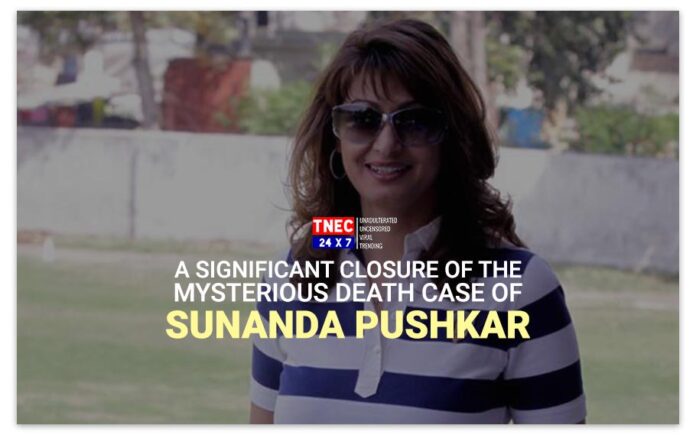 “The accused is discharged” declared judge Geetanjali Goel which ended the long battle of seven years of Congress MP Shashi Tharoor. The Indian politician was cleared of all charges in his wife’s death case. Let’s take a deeper look at the death case of Sunanda Pushkar, the wife of Shashi Tharoor.

Sunanda Pushkar, a renowned businesswoman from India who is also the late wife of politician Shashi Tharoor was born on 27 June 1962, in a Kashmiri Pandit family. She was not only the co-owner of the India-based Rendezvous Sports World (RSW), a cricket franchise in the Indian Premier League but also a sales director in the Dubai-based TECOM Investments.

After the death of her second husband, Sujith Menon in 1997, Sunanda met Shashi Tharoor in October 2009. They eventually started dating and finally, the couple got married in 2010. This was the third marriage for the duo.

Sunanda Pushkar was involved in a Twitter scandal where she used her husband, Shashi Tharoor’s Twitter account to post a series of curious tweets that appeared to be direct messages from Mehr Tarar, a Pakistani columnist, expressing her love for Tharoor. Mehr was also accused of being a Pakistani spy.

After the outbreak of this ugly scandal, Pushkar was found dead in room number 345 of the Leela Palace hotel in Chanakyapuri, New Delhi on 17 January 2014.

Her dead body was discovered by Tharoor when she did not wake up from her sleep in the evening. After Delhi Police recovered the body and it was sent for postmortem. Initially, she was suspected to have committed suicide, however, later reports stated that the cause of death was unnatural.

Injury marks were found in the preliminary autopsy report by the All India Institute of Medical Sciences. The autopsy report indicated that Sunanda Pushkar died due to an overdose of drugs, most likely a combination of sedatives, other strong medicines and probably alcohol.

On 1 July 2014, AIIMS doctor Sudhir Gupta confessed that he issued a fake report after being pressured. The medical team, that was investigating her death declared that she died of poisoning on 10 October 2014.

After proper probation, Delhi Police suspected that Sunanda was murdered, so they filed a first information report in this regard on 6 January 2015.

Additionally, the domestic help of Pushkar revealed that Pushkar had often argued and quarrelled with Tharoor, and days before her death, she had threatened Tharoor, that she would “disclose everything” and he would be “finished”. Shashi was accused by a BJP politician, Subramanian Swamy and a case were filed against Tharoor in January 2015.

A lie detector test was conducted by Delhi Police on three suspects related to her death. Shashi Tharoor was inculpated with abetment to suicide of his wife and marital cruelty under sections 306 and 498A of the Indian Penal Code in May 2018. However, Tharoor denied the charges.

On 18 August 2021, a clean chit was issued against Tharoor for Sunanda Pushkar’s death. The Rouse Avenue court in Delhi discharged Shashi Tharoor in connection with the Sunanda Pushkar death case.

Tharoor expressed his gratitude to the Delhi court by saying, “I am so grateful, it had been seven and a half years and it was an absolute torture”.

A senior advocate, Vikas Pahwa reported on the verdict that, Tharoor had faith in the judicial system right from the beginning. “It was a long battle of seven years but ultimately, justice has prevailed”, he added.

“This brings a significant conclusion to the long nightmare which had enveloped me after the tragic passing of my late wife Sunanda,” Shashi Tharoor wrote. “I have weathered dozens of unfounded accusations and media vilification patiently, sustained by my faith in the Indian judiciary, which today stands vindicated”, he added.

Also Read: Josef Mengele: the Angel of death! Read to know his story

Ola driver allegedly masturbates in front of a woman in Bengaluru