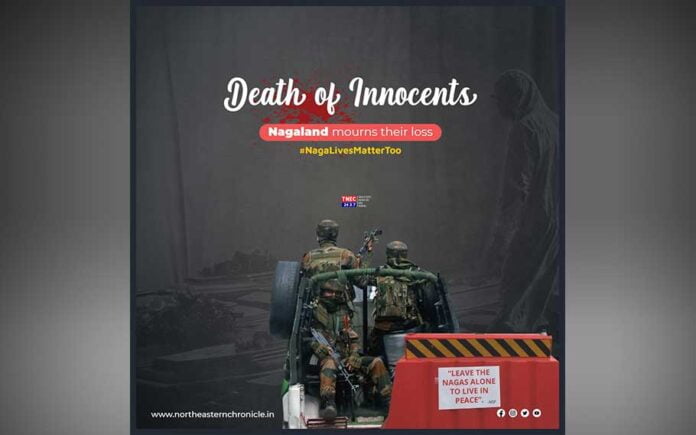 Earlier on Sunday, December 4, 2021, a tragic incident took place in Nagaland where 13 civilians were killed by the armed forces who “mistaken” them as NSCN insurgents.

Following this, Nagaland’s Home Commissioner, Abhijit Sinha, issued an order prohibiting the usage of mobile internet services in the Mon district till further notice. After 13 citizens were slain in a deadly shooting in Tiru/Oting village region under Tizit and Naginimora sub-divisions, the prohibition was enacted to maintain law and order in the area.

According to a press release from Chakhesang People Organisation, all Hornbill Festival events at Pfutsero, Kisama, and everywhere under CPO control have been suspended till further notice.

The organization condemns the armed forces’ killing of civilians in Nagaland on Sunday. They decided to show their support.

“The incident at Oting and Tiru can never be mistaken identity nor information failure,” the CPO stated in a press release. This is genocide against innocent civilians… While extending our solidarity a total shutdown of all activities on Hornbill festival at Pfutsero, Kisama, and elsewhere under CPO jurisdictions will remain closed on 6th December 2021 till further notice,” the statement said.

Citizens of Nagaland have also protested the Hornbill Festival 2021, which is presently taking place in Kisama, near the state capital of Kohima, by erecting black flags on the Hornbill venue.

More than a thousand citizens in the Mon district went out on the streets on Sunday evening and vandalized the 27 Assam Rifles camp in the region. The protestors invaded the Assam Rifles camp and set fire to a couple of the forces’ properties.

Meanwhile, from Mon, the onslaught by civilian groups moved to Tuensang district. A group of civilians set fire to a few shops in Tuensang, but Tuensang fire services were able to contain the situation within one hour.

Following the killings, some have called for the repeal of the Armed Forces Special Powers Act (AFSPA) of 1958, which grants the Indian Armed Forces special powers to maintain public order in “disturbed areas.”

As the Isak-Muivah-led National Socialist Council of Nagalim, the largest Naga rebel group, lashed out at Indian security forces for their “absurdity and insanity,” it also pointed to the problems that the state’s citizens have faced in the past at the hands of “trigger-happy Indian security forces” under the controversial AFSPA.

“Unprecedented in recent history, the absurdity and insanity of the Indian security forces have been exposed in the most brutish manner, a ‘black day for the Nagas as the Nagas mourns the barbaric killing of innocent villagers in Oting village under Konyak Region on the evening of the 4th December 2021,” the NSCN-IM, one of five NSCN factions engaged in peace talks with the Centre, said.

The rebel group, which signed a ceasefire agreement in 1997 and a “framework agreement” in 2015, said that security forces were killing people to suppress the legitimate Naga political movement.

“Not withstanding the ongoing Indo-Naga political dialogue that has seen much fruition during the period running more than two decades, the violence against the Nagas continues unabated. This is one of the most unfortunate parts of the Indo-Naga ceasefire signed in 1997,” the organization stated.

The killings that occurred during the ongoing peace talks shocked the Niki Sumi-led Khaplang faction of the National Socialist Council of Nagaland (NSCN-K).

The Forum for Naga Reconciliation (FNR) called for a speedy investigation into the incident, claiming that AFSPA was “anti-peace” by its inherent nature and that the state government should suggest its repeal and the withdrawal of armed forces from civilian areas.

The Mon District police started an investigation after an FIR was lodged at Tizit police station under sections 302, 307, and 34 of the Indian Penal Code (IPC).

“To facilitate free and fair investigation of the case and look at the complexity of the entire case, which may involve an investigation at multiple jurisdictions beyond the Mon district, the case is transferred to State Crime Police Station (SCPS),” the Nagaland government’s home department said in the order.

The SIT will lead the investigation, which will be supervised by Sandeep M Tamgadge, ADGP (Law and Order). The SIT may co-opt any other Police Department officials onto the team if they are considered fit, according to the order.

Furthermore, the SIT will have one month to complete the investigation from the date of the case’s registration.

Amit Shah on December 6, 2021, stated in the Lok Sabha over the entire tragic incident that took place in Nagaland from the start. He said, “Army had received information on the movement of extremists near Tiru, Mon.

On that basis, one unit of Army’s 21 Para Commando laid an ambush in the suspected area. A vehicle reached there; it was signaled to stop but it tried to flee. On suspicion of carrying extremists, it was fired upon. 6 out of 8 people in the vehicle died.

It was later found to be a case of mistaken identity. 2 others who were injured were taken to the nearest health center by Army.

He further said, “After receiving news of this, local villagers surrounded the Army unit, set 2 vehicles on fire, and attacked them. As a result, one jawan of the security forces died; many other jawans were injured. Security forces have to resort to firing for self-defense and to disperse the crowd. This led to the death of 7 more civilians, some others injured. Local administration and police tried to bring the site to normalcy.”

He added, “After the incident, on December 5 evening, an agitated crowd around 250 people vandalized the Company Operating Base (COB) of Assam Rifles in Mon city and set the COB building on fire. Assam Rifles had to fire bullets to disperse the crowd. This caused the death of one more civilian. SIT to probe Nagaland incident and has been asked to complete investigations within a month. It has been decided that all agencies should ensure that such unfortunate incidents do not take place again in the future while taking up such drives. The government is monitoring the incident minutely and necessary remedial measures are being taken to ensure peace in the area.”

He expresses his grief, “The government of India expresses deep regret over the unfortunate incident in Nagaland and also expresses deep sympathies to the bereaved families.”

The state and the entire country condemn the tragic incident that took the lives of 13 innocent civilians. The Nagaland CM and the citizens of Nagaland have urged for repeal of AFSPA in the state.

Home Minister Amit Shah, Assam Governor Jagadish Mukhi, and many others have extended their grief and condemned the incident.

The state government of Nagaland has called for five-day state-wide mourning starting from Monday, 06 December 2021. Further investigation is going on in this incident.