Nilotpal Boruah: Learn how Ayursundra’s doctors take chances and fail to save a life 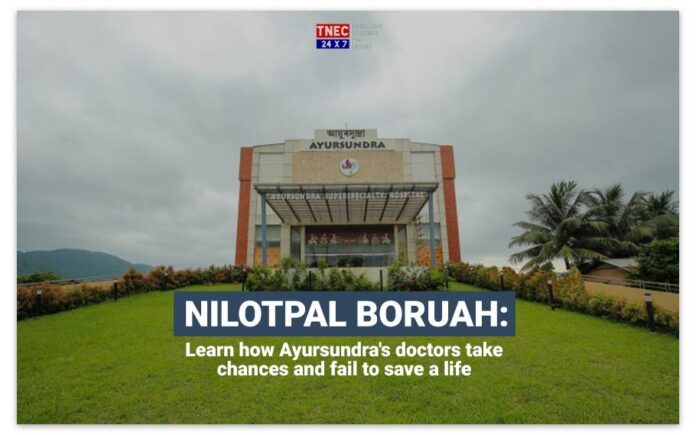 With advancement in science, technology and medicines, mortality rate has decreased considerably in today’s time. Since time immemorial, the place of the doctors in society has always been high. Seen as a social worker who is available at any hour when required, tending to patients from any walk of life.

Doctors are regarded as the champions of humanity. But, lately, this facade has come undone and very recently, in Garchuk’s Ayursundra Superspecialty Hospital where a young boy, identified as Nilotpal Boruah, lost his life due to the hospital’s doctors’ negligence.

The unfortunate incident unfolded when Nilotpal Boruah met with an accident on 26th of August and he was soon rushed to the nearby Ayursundra Superspeciality Hospital in Garchuk, where he breathed his last. But, initially, the family was assured of the patient’s survival and good health, taking his youth in consideration.

The hospital claimed that the patient would be under 24 hours observation but on the very next day, they showed their true colors. The patient’s CT scan was delayed and so was his surgery which they claimed was to be an ’emergency one’, which had ultimately led to Nilotpal’s untimely demise. Had the doctors acted sooner, it would have been a different story for the family.

Dr. Simranjit Singh and Dr. Vandana Singh: the stars of the show!

It was Dr. Simranjit Singh, who did the surgery on Nilotpal and also the one who said a CT scan was necessary to determine the patient’s internal condition as the patient suffered from internal bleeding.

The doctor, very well, claimed that Nilotpal would be up and about by just taking some medicines and also because he was young and breathing fine without any support, everything was well. The said CT Scan was delayed by several hours as it was supposed to be done in the morning at around 9 a.m. but it was finally done at 8:30 p.m., after various attempts of trying to meet the doctor, as claimed by his sister.

Another doctor, Dr. Vandana Singh, when asked about the results of the CT Scan, suddenly changed the scenario of a smooth sailing life to a tumbling boat. Nilotpal was urgently to undergo a surgery as he was all of a sudden, in a critical condition. But, earlier his family was summoned by the dietitian and they all witnessed him shaking violently, but was again assured that it was normal.

Later, the hasty nature of the doctor came across as very rude whilst shutting down the questions and confusion from the troubled family. Nilotpal soon, was required to be on ventilation support and also required blood. However, the blood donors were sent away to Narayana Hospital as Ayursundra lacked the necessary means. They were aided with 2 units of blood from the former and the patient was wheeled into the operation theatre.

The Aftermath of the life-changing surgery

Nilotpal was wheeled into the operation theatre at utmost urgency but his actual surgery started one and half hours thereafter and it was over by 3:10 a.m. in the morning and as claimed by the family member, Dr. Simranjit called for a CT Scan again.

This time, the tables have turned and the same doctor now said that Nilotpal would not be the same again and the accident has altered his life, altogether.

The day after the operation was a dreaded Sunday, and to everyone’s surprise, there were no doctors available in the hospital to tend to the patient. Doctors are regarded as the kind of ‘superhumans’, who are always available in a distress situation to aid and cater to society’s needs and suddenly, words like “no doctors are here, because it is a Sunday” can shake everyone to their core.

The patient’s life was hanging by a thread and with no available doctor, the family decided to shift him to GNRC hospital but an Ayursundra’s hospital staff’s assurance of receiving the best treatment here, rather than in GNRC, made the family decide against it.

The ‘friendly’ nature of the Medical Staff

A good nature is always pleasing to the heart. The blow of the death of a family member is no easy one but a helpful nature of the medical staff would have appeased the breaking hearts of a devastated family.

The family of the deceased faced several mistreatments and rude repercussions from the doctors who made the family members chase them around and to request the doctors to hasten with the medical procedures. They were already snubbed off by the ICU-in-charge, who stated there were 50 other people and Nilotpal was not the only one who was to be prioritised.

They were once again mistreated when they wanted to shift their patient to GNRC and asked to see the doctor on the Sunday morning. They were not provided with any contact information of the doctor but, was rather told that not anyone could meet the doctor.

There was a phone call to be attended over Nilotpal’s transfer to GNRC, with the In-charge of the GNRC’s emergency cell, Ayursundra declined to take the call, claiming they could not just talk to anyone or any doctors, for that matter, over phone.

Cruelty in the face of helplessness, the hospital’s negligence and ‘tone-deaf’ treatment had already surrounded the family with doubts and false hopes.

After the surgery, the doctor had claimed that the swelling inside him had stopped and interestingly, they knew about it by touching the patient, without a CT scan. The patient, although, came out of the surgery in good shape and responded to stimulus.

On the night of his death, his mother was not allowed to see him and he was administered emergency medications but he had already passed away, since then. In the sudden burst of emotions, his mother shattered the glass door of the ICU room which was synonymous to the sound of her shattering heart.

A very ugly scene soon emerged as 8-9 police personnels made their appearance after the family complained about delayed surgery and other medical procedures, which might have not resulted in such a tragic end.

The family were offered various medical incentives and a hefty discount on the medical bills, much to the disgust of the family members. Money amounts to nothing when a family just underwent a traumatic experience of losing a dear one.

Nilotpal was a son, a brother, a nephew, a grandson and many more things but a negligence in part of the doctors had snatched him away from everyone who held him dear and from a future he could have forged. Now, are we safe at the hands of once the “champions of humanity” turned doctors who function with a selfish motive and no regard for lives?

Also Read: Nandita Saikia: Withered away quick like a bud in bloom! Paid the hefty price of saying ‘No’