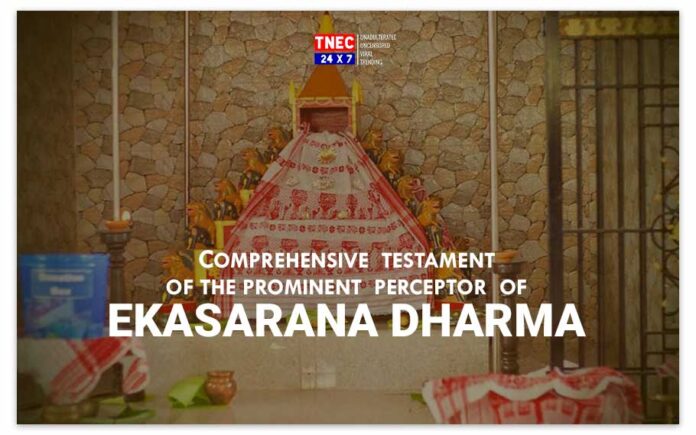 By: Swagata Borah, The North-Eastern Chronicle

Mahapurush Madhavdev, who is known for his loyalty and devotion towards his Guru Srimanta Sankardev, is the most prominent perceptor of the Ekasarana Dharma.

Born in the year 1489, to parents Govindagiri Bhuyan and Manorama, Madhavdev hailed from Letekupukhuri, Narayanpur which is located in the Lakhimpur district in the Northeastern state of Assam.

Harasinga Bora, an officer of of the Chutia Kingdom helped Madhavdev to attain his early education at Narayanpur. Once Madhabdev’s sister Urvasi was married off to Gayapani, a Bhuyan, Madhavdev and his father headed back to Banduka where he continued his education under a teacher named Rajendra Adhyapak.

At this period Madhavdev became well versed in the Tantras, Tarka-shastra, Purana and other literature associated with Saktism.

Madhavdev grown up to be a staunch sakta in his learning and practice, and on receiving news of his mother’s illness while in Banduka, he resolved to sacrifice two goats to propitiate the goddess. In the meantime his brother-in-law Gayapani had converted to Ekasarana and refused to procure the goats for the sacrifice.

A debate ensued and Gayapani, now named Ramadasa, took Madhabdev to meet Sankardev to discuss the conflicts. The debate amidst the two continued for a long time till Sankardev uttered a sloka from the Bhagavata Purana. Hereafter, Madhabdev was convinced and accepted Sankardev as his Guru.

It was at the age of 32 when he joined Sri Sankardev’s scholarship, literary and musical genius to the cause of Ekasarana dharma. It was then that Sankardev accepted him as his ‘prana bandhava’ (friend of soul) and later appointed him as his successor. Madhavdev’s conversion occurred in the year 1532 after which he broke his betrothal and determined to never marry.

Madhavdev’s contribution as an author and a Saint-poet is colossal and ever green. His depth of perception and versatility is reflected through his prolific writings. Sankaradeva himself expressed admiration towards the poetic brilliance Madhavadeva when he said, “You have remarkable hold over your pen, you can elaborate and summarize with equal ease. I on my part can only make abridgements.

Madhavadeva’s first work Janma Rahasya is a work of about 300 verses which relates the story of the creation and destruction of the world and thus establishes the omnipotence of God.

Some of the prominent works by the saint are Nam ghoxa (the book of the Lord’s Name) which is also known as Hazari ghoxa (the book of thousand couplets), Bhakti Ratnavali, 191 Borgeets (classical based devotional songs), 9 Jhumuras (one-act plays), Janma Rahasya, (a book on the creation and destruction of the world), Naam Maalikaa, Adi Kanda of Valmiki’s Ramayana (the Assamese rendering) and Guru Bhattima (a long poem praising his ‘Guru’ Srimanta Sankardeva.

Madhabdev also composed a third chapter on having lost the two chapters composed by Sankardeva, of the ‘Kirtan-Ghosha’ titled ‘Dhyana Varnana’.

He is still praised and remembered for his contribution in the field of literature and artistic brilliance as well. The Saint departed in the year 1596 at Bhela Satra, Koch Bihar at the age of 107.

August 27, 2021 is being observed as the 425th Tirobhav tithi of the saint. The day is a regional public holiday in the north-eastern Indian state of Assam on the 16th day in the month of Bhadra that falls during the month of August or September in the western calendar.

In year 1528 Madhavdev established the famous Dhekiakhowa Bornaamghar, in the Jorhat district of Assam. It is known that the saint kindled an earthen lamp there, which has been continuously burning ever since and a strong contender for the longest continuously lit lamp in the world.

Also Read: From History to Heritage: The Manifestation of the 500-year-old Sattriya Nritya