Secrets of Sinauli Archeological site: Read to know more about some outstanding revelation of Indian history 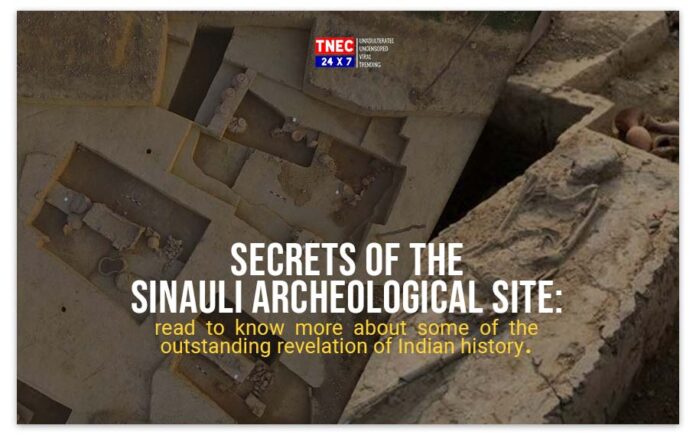 Sinauli has been more on the limelight recently after Discovery Channel recently aired a documentary on the Archeological Site and its findings that has caught everyone’s attention. Let’s read to know more about some of the amazing things about our Indian history that were discovered from this Archeological site.

Where is Sinauli situated?

The archeological site Sinauli is situated in Uttar Pradesh’s Baghpat district. And It is about 70 kilometres away from New Delhi. Located at the doab of Ganga-Yamuna rivers. The site has caught everyone’s attention revelation and discovey of Bronze age Horse’s charriot that were found in 2018.

The site at Sinauli was accidentally discovered by some farmers levelling agricultural land, when they suddenly came across human skeleton and and some ancient pottery. That led to the exploratiom and excavations by the Archaeological Survey of India (ASI).

Excavations in Sinauli started first in 2005-2006 and within a year 116 burial sites were discovered making it the biggest burial site in entire Asia, but due to some reasons no more excavations were done and was discontinued further until 2018. The findings tentatively dated back to 2200–1800 BCE. ASI associated them with the Harappan civilisation and might be from Late Harappan or post-Harappan era.

Two antennae swords that were discovered from Sinauli, are with a copper sheath, has similarities Harappan context. Other important grave goods from Sinauli are a dish-on-stand and a violin-shaped flat copper container having nearly 35 arrowhead shaped copper pieces placed in a row.

But among these, the extraordinary thing is that the burials were similar to vedic culture and not Indus Valley culture, Impressions of cloth to wrap the bodies suggests purification of corpses like those were practiced today also in Hindu customs. The carbon dating tests confirmed that the burials were 4,000 years old.

Excavation in 2018, amd its findings

The most striking aspect of the excavation has been the discovery of three ‘chariots’, which were almost 5000 years old (2500 -1900 BCE). Now why the discovery of chariots is so important, in Indian history? Because was the very first time that in India chariots were discovered amd seem and were quite contemporary to the Mesopotamian and Sumerian culture.

It also contradicts the theory that horses were introduced to India from western and central Asia by the ‘immigrants’ or ‘invaders’.

Other interesting artifacts, such as copper engraved shields and antenna swords with copper wired wooden hilts. Among the weapons found from burials,there were skeletal remains of women. It has also raised the possibility that first time archaeological evidences of women warriors from ancient India were found.

Seven human burials including three coffin burials – have been excavated by the ASI in 2018. All burials the head was found to be on the northern side, with pottery beyond the head and on the south after the feet.

The wooden coffin stands on four wooden legs. The entire coffin, is covered with copper sheets on all sides. Its stated that the burial may dating back to the ‘Mahabharata’ is around 1750 BCE.

The 55 minute documentary on Discovery plus titled “Secrets of Sinauli” by Neeraj Pandey examines these archeological findings closely and recorded when the excavation was going on. Hosted by actor Manoj Bajpayee, backed by wonderful animations and graphics helps the viewers visualize how these ancient Sinauli people would have looked, makes the experience more worth the watch.

Various stalwarts from the ASI and other bodies explain and put forward theories with evidences, countering the different western hegemonic narratives about ancient Indian history.

Though there are still lot left to discover from Sinnauli but it can be a stepping stone that can lead to many such revealtion of our Indian History. Our history is still unknown to us, and all that have been presented to us in many fabricated manner.
We hope for more such exacavations to discover more about our origin and the culture of ancient India. Let our people be known as the oldest civilisation that we are and take pride in it.

Also Read: What do you miss about college life? Here’s 5 things which will make you nostalgic