Read to know the story of brutal murder of Thangjam Manorama 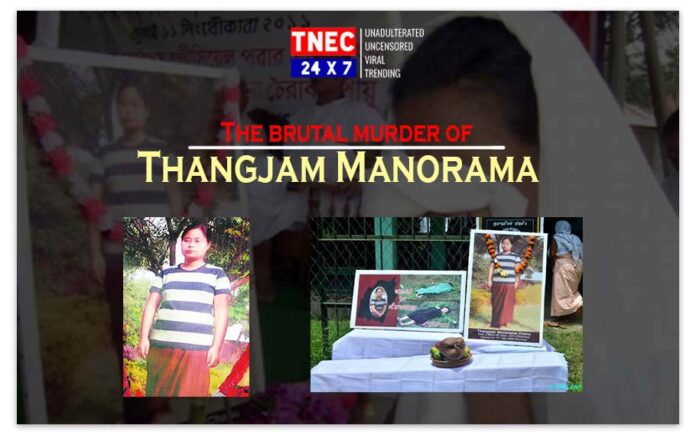 By: Mayuri Chowdhury, The North-Eastern Chronicle

Thangjam Manorama born in 1970 was a 32 year old woman from Manipur. On July 11, 2004 her bullet ridden body was found from the fields four km from her home in Bamon Kampu village in Imphal East district. Her body was half naked and badly mutilated. A total number of 16 bullet wounds and injuries was found.

Manorama was picked up by “a strong-armed troops of 17th Assam Rifles” in the night between July 10-11, 2004 from her home in Imphal East District. Manorama was clutching on to her mother Khumaleima and was dragged out while she was screaming “Ima Ima Khamu (mother, mother please stop them)”, she was tortured on her front porch, as the family watched.

According to Assam Rifles she was the informer of PLA and IED expert so they took her to their custody. According to the 17th Assam Rifles she led them to recover Kenwood and Chinese grenades and an AK 47 rifle. They said she tried to escape and was shot in the legs. The FIRs claimed she had bled and died.

Her body had taken 16 bullets and none of them had hit her legs.

Manorama, Basu, her younger brother and their mother Khumanleima were watching Hindi film Raju Chacha half past midnight.
They heard some noise outside and minutes later there was knocking on their door. The Assam Rifles crashed into their house and dragged Manorama, his elder sister.

After Manorama was ruthlessly murdered, Manipur broke out in widespread anger. On July 12, 2004, various civil society groups called for a 48-hour protest strike.

Tyres were burned and protesters held banners demanding justice. The protests on July 15, 2004 made Manorama’s murder national news. A group of elderly women gathered in front of the headquarters of the 17th Assam Rifle Regiment, then stripped off their clothes and asked the army to rape them because Manorama had already been raped.

These women belong to Meira Paibi, which literally means “bearer of the torch”, but is also often referred to as the Front of Mothers. The organization started as a support group to solve social problems, especially male alcoholism and child drug abuse.

However, as the armed conflict deepened, Melapabi also participated in activities to prevent human rights violations and joined the campaign to abolish AFSPA. L. Gyaneshwari was one of the women who participated in the protest. She told Human Rights Watch that Manorama’s murder broke our hearts. We have launched an arrest memorandum campaign to protect people from torture after being arrested.

However, this did not stop the soldiers from raping and killing her. They mutilated her body and shot her in the vagina. Our mother cried, “Now our daughter can be raped. They can suffer so much cruelty. All girls are in danger. “We stripped naked and stood in front of the army. We said, our mother is here. Drink our blood. Eat our meat. Maybe then you can forgive our daughter. “But no measures were taken to punish these soldiers.The women of Manipur were disrobed by AFSPA. We are still naked.

Failure of justice to Manorama and her family

On July 12, 2004, after Manorama’s body was found, his brother Thangjam Dolendro Singh filed a written complaint with the Irilbung Police Station. According to the complaint, the police registered a preliminary information report to investigate the alleged murder. Police ordered a forensic test to determine if a rape occurred and ordered a DNA test to identify the perpetrator.

The Assam Rifles refused to send anyone to provide statements or testimony to the committee about what happened the night of Manorama’s death, stating that all relevant personnel had been transferred. He claimed that he is conducting his own investigation into the matter, so the police or other civilian personnel cannot participate.

In the end, after repeated evasions, the Assam rifle team submitted a judicial petition to the Guwahati High Court, questioning the establishment of the committee. It stated that, according to Article 6 of the AFSPA, legal investigations of members of the armed forces whose AFSPA is in force cannot be carried out without prior permission from the central government, while the Manipur state government cannot.

The court held that although the committee can continue its investigation, its findings should not be made public. It also allows military personnel to appear before the committee (it is not open to the public or the media).

In the end, Guwahati High Court ruled that the Manipur state government has no right to establish the investigation committee. It instructs that the report prepared by the committee be sent to the central government so that the necessary measures can be taken.

In 2014, after multiple appeals, the Supreme Court received the report as part of a larger case of violence in jail. Upendra Singh wrote that Manorama was, in fact, brutally raped and murdered. Currently, the Supreme Court is requesting testimony of violence and torture in the Manipur prison in a recently filed PIL on how deaths caused by torture in prison amount to extrajudicial executions.

Also Read: From “Big Mary” to “Murderous Mary”: The town that witnessed the death of the majestic elephant

Allu Arjun’s massy avatar in the Pushpa: The Rise trailer teaser will leave you eager for the official video on Dec 6; watch now!

Allu Arjun’s massy avatar in the Pushpa: The Rise trailer teaser will leave you eager for the official video on Dec 6; watch now!

Ola driver allegedly masturbates in front of a woman in Bengaluru

Hornbill 2021: ‘Festival of Festivals’ is all set to commence from today

Assam and other Northeastern states to witness heavy rainfall in upcoming days of December 5 and 6, IMD predicts

Guwahati: New Medical College to establish in the State