More
Home Infotainment Some terrifying creatures that have existed but are now extinct! Let’s have... 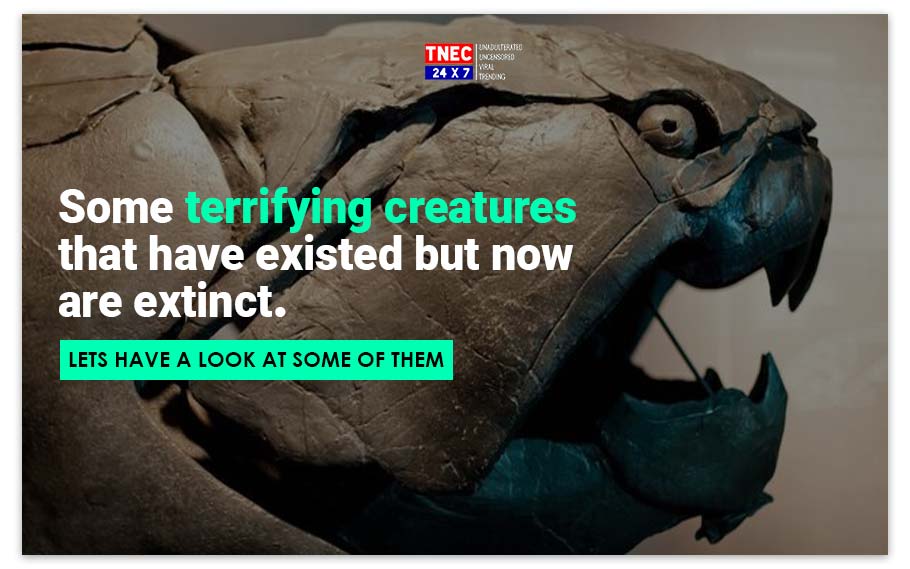 There’s been about 4 billion years since life on earth and a lot of it has been changed due to evolution. Though most of the species are extinct now which once existed, some were terrifying, like the ferocious dinosaurs. But dinosaurs were not the ever so terrifying creatures that existed.

Here’s we look at some of the most terrifying creatures that existed millions of years back. Which could have completely destroyed out world if they were alive today.

Liopleurodon was a giant marine reptile, this species lived during the collovian days of the jurasic period (160 to 150 million years ago). Liopleurodon were predators and grew upto the the size of 33ft, and mostly fed on aquatic animals like fish etc.

They were one of the best predeators of their time, and their long flippers allowed them to swim extremely quickly. Liopleurodon fossils have been found mainly in England and France. Currently, there are two recognized species within Liopleurodon. From the Callovian-Kimmeridgian of England and France L. ferox is well known.

Long before dinasaurs ruled the prehistoric world, there were other dominant predator that lives known as Gorgonops. They lived around 260 millions years ago. They were not of that giant of size grown up to 10ft of size. But were been one of the key predators across southern Africa because of their larger canines, they would have had little trouble in penetrating the tough hides of some of the herbivores of that time.

It’s in the year 1876, the first gorgonopsian remains were found in South Africa, by the biologist and paleontologist Richard Owen. He classified the fossils as Gorgonops torvus, combining the Greek Gorgon, a mythological beast, with the word óps meaning ‘aspect’.

Megalodon simply means “big tooth”, it is an extinct species of mackerel shark that lived approximately 23 to 3.6 million years ago.It was first thought to be a member and a close relative of the great white shark. However, it is now classified into the extinct family Otodontidae, which diverged from the great white shark during the Early periods.

Megaladons are widely regarded as one of the largest and most powerful predators that has ever lived. Data suggests that mature adult megalodons had a mean length of 10.2 metres (about 33.5 feet), the largest specimens measuring 17.9 metres (58.7 feet) long. Making it the largest fish ever known.

The woolly, Northern, or Siberian mammoth (Mammuthus primigenius) is by far the best-known of all mammoths. They were mostly about as large as modern elephants. The North American imperial mammoth (M. imperator) attained a shoulder height of 4 metres (14 feet).

Thylacosmilus were ferocious predators look like saber-tooth cats, actually belonged to an extinct group called ‘sparassodonts’, closely related to the marsupials alive today. They lived in what’s now South America and were discovered by Field Museum paleontologist Elmer Riggs in the early 1920s.

It is difficult to estimate the size of these creatures, since these animals have relatively large heads in proportion to their bodies, leading to overestimations, particularly when compared with skulls of modern members of Carnivores. Thylacosmilus, extinct genus of carnivorous, fossils deposits says that they lived about 10 million to 3 million years ago (late Miocene to late Pliocene Epoch) in South America.

Though these animals might have extinct many many years back before the human evaluation began, and we can find its fossils remaining. Through which we can identify how these animals once ruled the world, and imagine what it was back then when these predators were hunting around.

The truth is, scientists don’t know how many species of plants, animals, fungi, and bacteria exist on Earth. An recent estimate put that number at 2 billion, and that will most likely change at some point as we are still finding out many such animals. Extinction happens when environmental factors or evolutionary problems cause a species began to die out. The disappearance of species from Earth is ongoing and maybe could not be stopped.

Also Read: Climate Emergency, crisis or breakdown: A matter we can overcome!

Twitter founder Jack Dorsey steps down as CEO, will be succeeded by Indian origin Parag Agarwal

Omicron: Deadliest COVID-19 variant ever! Here is all you need to know

Jorhat: “Me or his Father have never hit him but today they have Beaten him to Death”, says Animesh’s Mother

Video: Indian Bride urges to change into night suit to do her pheras

Twitter founder Jack Dorsey steps down as CEO, will be succeeded by Indian origin Parag Agarwal

GMC vows to take away all barriers to initiate growth and development by amending GMC Act, 1971

Omicron: Deadliest COVID-19 variant ever! Here is all you need to know

Guwahati: 9-year-old girl saves herself from kidnapping in Geetanagar Area

PM Modi in ‘Mann ki Baat’: “I want to stay in service, not in power, I am only a servant of the people”

Human Poop could be replacement for coal to generate electricity: Reports

Jorhat: “Me or his Father have never hit him but today they have Beaten him to Death”, says Animesh’s Mother

GMC vows to take away all barriers to initiate growth and development by amending GMC Act, 1971

Guwahati: 9-year-old girl saves herself from kidnapping in Geetanagar Area

Guwahati: Direct bus service to be provided by RTA on Mother Teresa Road in Geetanagar

WHO terms new COVID Variant as ‘Omicron’, Assam Government warns to ‘up our guards’

Assam: Mother of three elopes with another man with 5 children; Father-in-law files complaint

Mizoram: The land of blue mountains

Assam: Much awaited Guwahati Municipality polls to be conducted in February 22

Assam: Woman with her newborn tries to kill herself after torture from Husband for giving birth to girl

SBI PO Recruitment 2021: Read to know how to apply