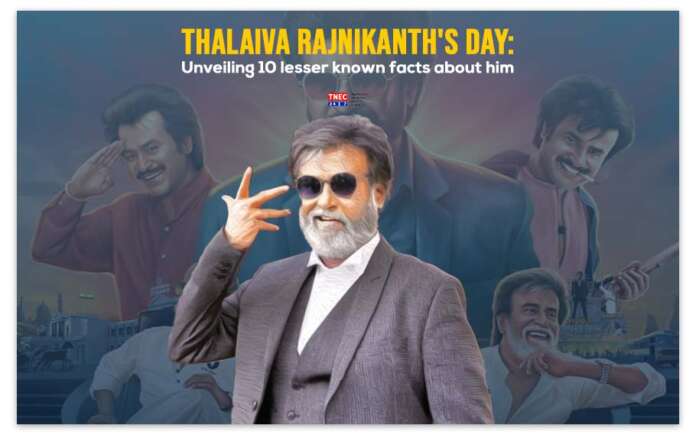 Happy birthday to Thalaiva. Today is Rajnikanth‘s day as he is celebrating his 71st birthday. Twitter is flooded today with his fans showering him love and blessings on his day.

Have you ever tried the famous sunglass trick of our Thalaiva? I’m sure most of us have tried.

Rajinikanth, also fondly known as ‘Thalaiva’, is one of the most celebrated actors. Right from a child to an adult everyone loves our Thalaivar not just as an actor but as a human being too.

We all have grown up watching his movies and I still remember being awestruck by his charismatic style. Even today, with his latest release ‘Annatthe’, Rajinikanth never fails to flatter us.

From a bus conductor to a legendary actor, he rose to become one of the most loved and celebrated stars not just in Tamil films but in the history of Indian films.

He initially started his career in movies as a supporting actor. He debuted as a cancer patient in Apoorva Raagangal in 1975. Rajinikanth has acted in around 190 movies, which includes Tamil, Kannada, Telugu, Malayalam, Hindi, English and Bengali films.

On 1st April 2021, Rajinikanth was awarded with the 51st Dadasaheb Phalke award.

On his 71st birthday let’s go through some lesser known facts about him :-

1) We should be grateful to Raj Bahadur: Rajinikanth’s friend for whom we got our Thalaiva. He encouraged Rajinikanth to pursue his dreams and become an actor. He’s still close to him. Bahadur asked Rajinikanth to enroll in the Madras Film Institute.

3) Everyone believes there is nothing that ‘Rajini can’t’! :-

From starting his career with supporting roles to the legend he is today, he as an actor has proved himself in his long career span. In his whole career, we have seen him do the most impossible things. His fans, in fact, believe that the actor can do anything on silver screen therefore; his character has never been killed by the filmmakers in a long time now.

5) From Bus Conductor to Superstar:-

Rajinikanth is the only Indian actor to have featured in the Central Board of Secondary Education (CBSE) syllabus in a lesson titled From Bus Conductor to Superstar.

6) Rajinikanth as a documentary featuring his fans:-

7) He is the highest paid actor in India

And the second highest in Asia, whatever he does becomes a trend. According to reports in the media, after the success of Sivaji, Rajinikanth’s fee of Rs 26 crore made him the highest-paid Asian actor after Jackie Chan.

It made into IMDb’s Top 50 films from around the world list in 2010. Not just that, the film has also been included as a case study in an IIM-A postgraduate elective course, Contemporary Film Industry: A Business Perspective.

9) Rajinikanth, who is in reality, a Maharashtrian

Rajinikanth has worked in numerous films of different languages but never in a film in his mother tongue, Marathi.

10) The day he opened Twitter he has 2.5 lakh followers

He appeared on Twitter for the very first time on May 5, 2014 and he instantly broke the record for the number of followers on the first day by any Indian movie star by getting over 2.5 lakh followers.

Rajinikanth or Thalaiva rules millions of hearts not just with his acting. But the actor is also known for his good rapport with everyone.

Age, failure or even illness nothing could have ever kept the Superstar down. Rajinikanth has always bounced back, and he continues to prove why he is the man, the actor and the hero beloved by everyone. Why with just the name ‘Rajinikanth’ movie tickets get sold out real quick.

No Assam Bandh on Republic Day decides ULFA (I)

Hardik Pandya announced as captain of Ahmedabad team for IPL 2022

Granthamala paves way for deliberations on future of books