The Story of Amaravati: From a dream capital city to a ghost town! What really happened? 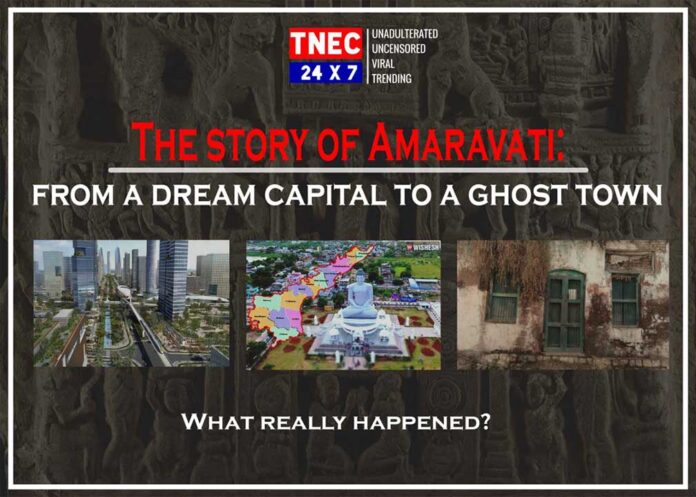 Amaravati is a beautiful city in Guntur district of Andhra Pradesh which is located on the banks of the Krishna river. It is considered as the proposed capital of Andhra Pradesh chosen by the Telugu Desam Party. The city is famous for its huge Buddha Stupa in India.

According to Indian mythology, Amaravati is the capital of the celestial beings. Historically, it was the capital of the first great Andhra kings, Satavahanas who ruled after the downfall of the Maurya Empire from the 2nd century BCE to the 3rd century CE. This beautiful city is also known as Punyakshetra or Amareswaram.

A farmer from Tulluru called Jammula Malleswara Rao remembering the day he bought an earthmover and leased it to a corporate house says, “It is rusting in the sun and rain,” he said, his face creased with worry. “I don’t know what to do. I have no money to pay my staff.”he had prepared himself in his mind for busy days ahead but his machine has been idle for over two months now.

Rambabu,always determined,is in a miserable condition. After purchasing three earthmovers with a loan of Rs 60 lakh that he got from private finance companies,he pays close to Rs 70,000 as EMI and after thinking about the salaries of employees,he complains, “I’ve put the machines on sale. I am on the verge of defaulting on instalments.”

New capital proposed for Andhra Pradesh is on shaky ground

Former CM Chandrababu Naidu had planned Amravati as a model city, which was to be built at a cost of Rs 2 lakh crore. But the new capital proposed for Andhra Pradesh, is now on shaky ground. So far, Rs 10,000 crore has been sunk into the project, but CM Jaganmohan Reddy has slammed the brakes.

Construction activities came to a standstill after the elections of the Lok Sabha and state assembly in the month of July. Hotels are also empty ,the auto showrooms have no buyers and even the new houses look haunted.

Prosperity and investment swept the City

Farmers sold their land in the striking boom in real estate and moved to what promised to be a profitable business. They have put money into construction, machineries related to construction such as tippers, tractors and earthmovers, A few got into housing for the hovering population working in numerous projects and the rest started supermarkets,appliances shops,hotels,creating a majestic urban ecosystem. Corporate houses such as Shapoorji Pallonji ,L&T and NCC which won various contracts,hired vehicles leased by local people . Everyone was with a hope, upbeat and starry-eyed.

Hopelessness all over Amravati

Today the city is hopeless,the farmers want to return to agriculture but the fertile lands are barren due to large-scale construction in the last four years in Amravati. They have been levelled and infrastructure such as drip irrigation systems,power connections,bore wells are wiped out. What even worse is the map is redrawn.

Shaik Subhani who once owned three acres at Venkatapalem on the banks of the Krishna now says,“We cannot take up cultivation even if we want to,”with teary eyes.

He now makes a living by selling bitter gourd on the street, which is almost always neglected. Legal hurdles abound, even if the land were to be returned.

Population in the city area had more than doubled

There was a rush of workers and employees of the high court, secretariat and other government organisations.Students and teachers of various educational institutions had sprung up around Amaravati. And according to Muppalla Anil, Twenty thousand workers have left the city. He made this statement when he had opened a supermarket at Tulluru.

Doctors, businessmen, IT professionals of Andhra and Telangana started visiting Amaravati who viewed it as the place to make a career. They took bank loans to buy property and start their career. Land in Amravati went for Rs 80 lakhs to 2 crores per acre.

It was a matter of pride and record when the prices have fallen steeply and all 1,200 expensive flats of the city were booked within minutes of opening and the first 300 were taken in under a minute.

And Satish Dhawan from Hyderabad was one of those who had booked a flat at that time. “Everyone called me up and congratulated me,” he said to TOI. “They said I had bagged a golden opportunity. Now they are all full of sympathy for me.” added Satish Dhawan.