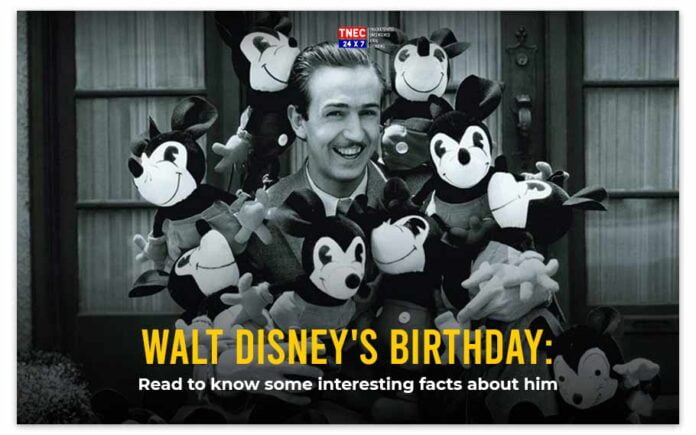 Today is the birthday of Walt Disney. The creator of The Walt Disney Company and the person behind one who gave us some most memorable movies for children and some iconic characters.

An American entrepreneur, animator, writer, voice actor, and film producer. Most of us grew up watching Disney movies and relating to their iconic characters.

From Mickey Mouse to Rapunzel, the Walt Disney Company gave us a huge list of characters that made our childhood awesome. As we remember Walt Disney on his birthday, let’s have a look at seven iconic Disney characters and interesting facts.

He planned and built Disneyland, a huge amusement park that opened near Los Angeles in 1955, and before his death he had begun building a second such park, Walt Disney World, near Orlando, Florida.

Walter Elias Disney was the fourth son of Elias Disney, who was a peripatetic carpenter, farmer, and building contractor. His wife, Flora Call, who had been a public school teacher.

When Walt was a young infant, the family moved to a farm near Marceline, Missouri, a typical small Midwestern town, which is said to have furnished the inspiration and model for the Main Street of Disneyland.

There Walt began his schooling and first showed a taste and aptitude towards drawing and painting with crayons and watercolours.

Walt later said that many of his habits and compulsions of his adult life has come from the disciplines and discomforts of helping his father with the paper route. The young Walt began to study cartooning with a correspondence school and later took classes at the Kansas City Art Institute and School of Design.

Worked as Ambulance driver in World War I

In 1917, when the Disneys moved back to Chicago, Walt entered McKinley High School, where he took photographs, made drawings for the school paper, and studied cartooning on the side, in hope to eventually have a job as a newspaper cartoonist.

Though his progress was soon interrupted by World War I, where he took part as an ambulance driver for the American Red Cross in France and Germany.

Returning back to Kansas City in 1919, he found an occasional job as a draftsman and inker in commercial art studios, where he met Ub Iwerks, a young artist whose talents contributed greatly to Walt’s early success.

With little satisfaction over their progress, in 1922 Disney and Iwerks started a small studio of their own and acquired a second hand movie camera with which they made one and two-minute animated advertising films for distribution to local movie theatres.

They further did a series of animated cartoon sketches called Laugh-O-grams and the pilot film for a series of seven-minute fairy tales that combined both live action and animation, ‘Alice in Cartoonland’.

Soon they introduced Mickey Mouse and his girlfriend, Minnie, and attracted the public’s taste for the fantasy of little creatures with the speech, skills, and personality traits of human beings. This popularity led to the invention of other animal characters, such as Donald Duck and the dogs Pluto and Goofy.

Here are some Popular Disney Characters

Also Read: KATRINA KAIF AND VICKY KAUSHAL SET RULES FOR WEDDING, ‘NO CONTACT WITH OUTSIDE WORLD, NO PHOTOS OR REELS’